Ruler of the monster world

Commands an army of monsters and toy weapons

Playing with toys and games.

Boy is the main antagonist of the 1989 comedy-drama-fantasy film Little Monsters, even though he only appeared near the end of the film. He is a monster who happens to just look human.

He was portrayed by Frank Whaley.

Before Brian Stevenson (the main protagonist of the film) and his friends he enlisted, have gotten there, Boy's assistant, Snik, has kidnapped Brian's little brother, Eric (Brian and Eric's actors are real-life brothers, respectively, Fred and Ben Savage) through the couch in the Stevensons' living room under his orders. Boy agrees to let Eric go on the condition that Brian converts to being a monster, but Brian refuses. Brian and his friends shine lights at Boy (burning his face off).

After the heroes slide Maurice (a fun-loving monster) under a door (after using light to turn him into clothes), they use more powerful light to destroy Boy. 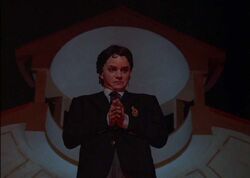 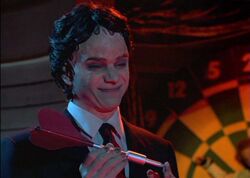 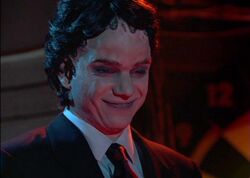 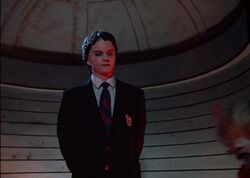