Song of the South

Br'er Bear is the secondary antagonist of the animated sequences of the controversial 1946 Walt Disney-produced film Song of the South.

He was voiced by the late Nicodemus Stewart in the original film and the Disneyland attraction, and the late James Avery in the Walt Disney World attraction, who was voicing Shredder in Teenage Mutant Ninja Turtles the 1987 TV Series.

Br'er Bear is portrayed as stupid, slow-witted and prone to violence when provoked, leaving him open to being tricked repeatedly by Br'er Rabbit when he accompanies Br'er Fox. Unlike the character's depiction in the earlier illustrations of Frederick S. Church, A. B. Frost, and E. W. Kemble, the Disney animators redesigned Br'er Bear in a more slapstick, cartoony style.

Br'er Bear is very easily angered and unlike the hyperactive and crazed Br'er Fox is a slow-moving brute of a beast who seems to be pleasant enough until he thinks someone is making a fool of him , (something that is not very hard to do considering he is a very dimwitted individual): at the slightest provocation Br'er Bear will fly into a rage and attempt to clobber his victim (usual Br'er Rabbit or Br'er Fox) with his large club or his bare paws - he is naturally the strongest of the group as well since he is a bear, a naturally strong animal.

Unlike Br'er Fox, Br'er Bear is not devoted to eating Br'er Rabbit but rather wants to get revenge on the Rabbit for continually tricking him - in fact he and Br'er Fox often quarrel over what to do with Br'er Rabbit when they catch him with Fox wishing to roast him on a fire while Br'er Bear simply wants to "knock his block clean off". 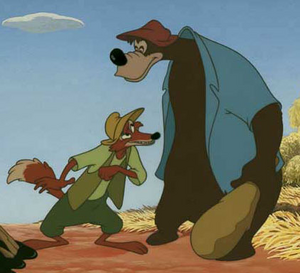 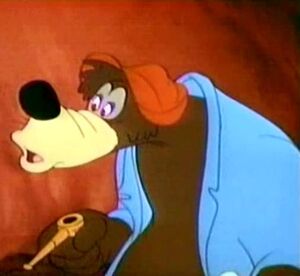