The Adventures of Brer Rabbit

Have Br'er Rabbit for dinner (failed).

Br'er Fox is the main antagonist of the 2006 animated film The Adventures of Brer Rabbit, which is based on the Uncle Remus stories by the late Joel Chandler Harris.

He was voiced by D.L. Hughley in the film.

His first appearance and conflict with Br'er Rabbit is near the very beginning of the film, where Br'er Fox is chasing Br'er Rabbit into a wishing well and attempts to get him out, but ends up falling in himself and getting stuck in the well due to Br'er Rabbit's trickery.

Br'er Fox is, later in the film, briefly seen in his Peanut Patch scolding Br'er Bear after Br'er Rabbit tricks him into a rope trap in the Peanut Patch, thinking Br'er Bear was attempting to take the peanuts.

Br'er Fox is then seen having a party later on in the film, not inviting Br'er Rabbit to the party because of all the things he'd done to them and Br'er Rabbit's trickery. In an act of mischief and a bit of revenge for not being invited, Br'er Rabbit covers himself in mud, leaves, and sticks, making himself look like a small, muddy monster with horns and fangs. He scares Br'er Fox and the other animals in the party out of the house in a panicked frenzy.

Shortly after this, when Br'er Rabbit is going to bed, out of anger, Br'er Fox breaks down Br'er Rabbit's door with an axe and is then seen carrying Br'er Rabbit tied to a stick, planning to have him for dinner. But Br'er Rabbit tricks Br'er Fox about how eating a sad rabbit causes him the "Heebie jeebies, the creepy crawlies, and a little bit of them dropsies thrown in". He tells Br'er Fox that to make him happy, he needed to take him to his laughing place, and, convinced, Br'er Fox drags Br'er Rabbit "all over creation", until they reach a scrawny, scrappy tree. Outraged, Br'er Fox shouts at Br'er Rabbit about how he had walked all over for a "pathetic, old, tree". Br'er Rabbit shakes his head and tells him to knock three times on the Laughing Tree, as he calls it, and after Br'er Fox angrilly knocks on the tree, a buzzing noise sounds. As it turns out, the tree had a large hole in the center, with a beehive inside. The bees angrily fly out and begin chasing Br'er Fox, who, screaming runs off in a panic as he gets stung.

Later on, Br'er Fox is seen with Br'er Wolf (who is the secondary antagonist in the film), planning Br'er Rabbit's downfall by thinking up a way to catch him and trap Br'er Rabbit to finally be rid of him once and for all. Both deadly friends make a tar baby and trap Br'er Rabbit with it, who gets stuck to the tar. Br'er Fox's sadistic side seems to show here, as he plans eagerly of Br'er Rabbit's fate, stating to Br'er Rabbit that, "Today is the day you finally get what's coming to you!". Eventually, unknowing agreeing to trickery from Br'er Rabbit, they throw him in a briar patch, but Br'er Rabbit suddenly jumps up and laughs, claiming that he was born and raised in a briar patch. Dumbfounded and angry, Br'er Fox and Br'er Wolf glance at each other and scream, looking back at Br'er Rabbit in disbelief, Br'er Fox saying that, "I cannot STAND him!" when Br'er Rabbit blows raspberry at Br'er Fox and teases him from the safety of the briar patch. Then, finally, both angered, Br'er Fox and Br'er Wolf run forward and into the briar patch, only to yowl and scream with pain as they realize their mistake and get covered in thorns. Br'er Fox states "Br'er Rabbit, I'm gonna get you for this!", waving his fist in the air, while Br'er Rabbit laughs and replies, "That'll be the day, Br'er Fox, that's be the day!" before hopping away and escaping.

Br'er Fox is soon briefly seen at the end of the film, where he asks Br'er Turtle where Br'er Rabbit went. Br'er Turtle, a close friend of Br'er Rabbit, points Br'er Fox the direction, which was, unknowingly, to Br'er Fox, purposely the wrong direction, and the fox heads off, saying "That's smart of you to tell me. Next time I'm hungry, maybe I won't eat ya.".

That is Br'er Fox's final appearance in the film. 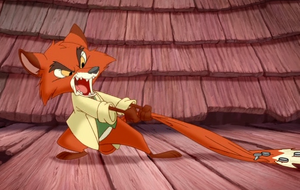 Br'er Fox attempting to yank out his nailed tail. 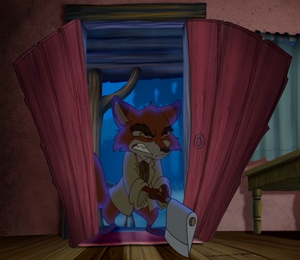 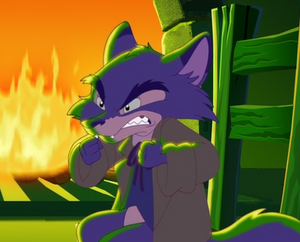