Getting popular with the ladies.

Humiliate Kick as much as possible.

He was voiced by Danny Cooksey, who also voiced Montana Max in Tiny Toon Adventures, Victor in The Ren & Stimpy Show, Hotstreak in Static Shock, Jack Spicer in Xiaolin Showdown, Django of the Dead in El Tigre: The Adventures of Manny Rivera and Brett and Chet in The Lorax.

Brad is Kick's older brother and one of his most common antagonists. He bullies Kick as he only refers to him as "Dilweed", and is left in charge of him and Brianna when their parents are out. Brad has very poor hygiene, and thinks he is popular (but this is not the case). He is presumably 14 years old, as he is still taking his driver's test. He mainly tries to ruin Kick's plans and stunts, but on occasion either helps him (willingly or not) or just ignores him.

Most episodes featuring Brad have him in an antagonistic role versus Kick. They fight, usually pretty violently, though they're more destructive to their surroundings rather than each other. In "Tattler's Tale" it's revealed that both Brad and Kick enjoy their fights with each other and will go to great lengths to cover it up from their parents, suggesting they are friendly fights. Plus, they have teamed up in some episodes since Brad is less than a villain, but somewhat an anti-hero in some occasions.

In "A Very Buttowski Mother's Day", Brad is convinced that he has "second place" in his mother's heart, and so tries to ruin Kick's present's to get 'first place'.

Brad is usually seen hanging out with his friends Horace and Pansy. They tend to act as his lackeys, performing whatever task he asks of them. Why they tolerate this is as of yet unknown. 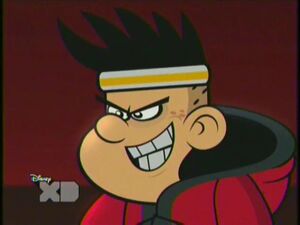