Excellence in playing the fear card

Playing with his killer whale.

Get his low level drug dealer David Clark to smuggle his rival Pablo Chacon's marijuana from Mexico and back to his company and swindle David and the Millers from paying the money.

Put Pablo Chacon's drug business out of operation so he can be the top drug kingpin (both succeeded, but he never got to enjoy it).

Brad Gurdlinger is one of the two main antagonists (along with Pablo Chacon) of the 2013 American comedy film We're the Millers.

He was portrayed by Ed Helms, who also played the Once-Ler in The Lorax.

Mr. Gurdlinger is a wealthy drug lord who is David Clark's crooked boss. He forcibly hired David to smuggle marijuana out of Mexico back to Colorado Springs in Colorado, USA by posing as an agent of a notorious Mexican drug lord named Pablo Chacon. In doing so, he stirred the wrath and resentment of said drug lord.

While David and his fake family were away, it is revealed that Brad had expected him to fail the smuggling attempt. He vexatiously made satires to David through the phone, goading him into putting all the effort into returning with the quantity of weed to him.

At the end, when David finally completes Brad's task, Brad is thrilled, but perfidiously he reveals that he never intended to reward him his money. Suddenly, DEA breach the building and seizes him (including his companions) thanks to David's help out, Don Fitzgerald. Brad is then taken into custody for his crimes. 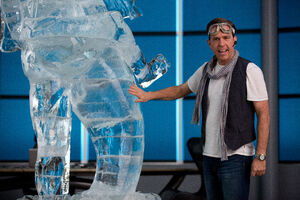 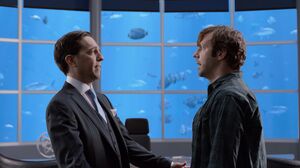 Retrieved from "https://villains.fandom.com/wiki/Brad_Gurdlinger?oldid=3706440"
Community content is available under CC-BY-SA unless otherwise noted.