Arresting criminals and letting them loose so they can be his informants.

Allow criminals to walk free on the streets and be their informants to further his own career (succeeded for a while).

Arrest Logan Nelson and Eleanor Bonneville due to suspecting them of being the Jigsaw copycat.
Survivve the Laser Collars and escape alive from the Tuck's Pig Farm (both failed).

Brad Halloran is the one of the two main antagonists (alongside Jigsaw) of the 2017 horror film Jigsaw, the eighth installment of the Saw franchise.

He is a corrupt police detective who uses to free the criminals he arrests so they can work as his informants and help him to further his own career. It's later revealed that Halloran indirectly caused the death of Logan Nelson's wife Christine, leading Nelson to turn into a Jigsaw copycat and restart his macabre games.

Not much is known about Brad Halloran's early life. His only known family is an unnamed brother whom he despises, referring to him as a "f*cking *sshole". He was also married at some point, but got divorced by his wife, who then didn't stop bothering him constantly.

Eventually, Halloran started working as a police detective in the Metropolitan Police Department, the large law enforcement group established on the city where the serial killer known as Jigsaw terrorized its inhabitants with his macabre games between early 2003 and early 2007. In most cases, he partnered up with Detective Keith Hunt, a fellow friend of his. However, Halloran was actually a corrupt cop and used to free some of the criminals he arrested so they could work as his informant to further his own career.

Among the criminals Halloran allowed to go back to the streets were the drug addict Edgar Munsen, the degenerated gambler Malcolm Neale, the predator Alistair Schultz, an unnamed man and an unnamed woman. Internal Affairs linked Halloran to many homicides, but they didn't have enough proof to do anything. Most criminals who Halloran released from prison went to kill and rape others, like Schultz, who murdered an eight years old girl after his release. One day, Munsen murdered Christine Nelson, the wife of the pathologist Dr. Logan Nelson, a fellow friend of Hunt and veteran, who went on to deeply hate Halloran afterwards, as it was thanks to Halloran that Munsen had been allowed to leave prison.

Ten years after the deaths of Jigsaw, Amanda Young, Jill Tuck and Mark Hoffman, Halloran is called up by his fellow cops upon cornering Edgar Munsen in a building's rooftop. Edgar insisted that the lives of five other people depended from him and that a new game would start, insisting of speaking with Halloran. Once Halloran arrives alongside Keith Hunt, he greets Edgar and instructs him to put down the triggering mechanism he is holding, but Edgar says that he can't and activates it, leading the officers to shoot Edgar. Before passing out, Edgar warned Halloran that a new game had begun.

Once Edgar is taken to the hospital, the mutilated corpse of Malcolm Neale is found at a park where Logan Nelson was playing with his daughter, leading Halloran to ask him to go to the hospital and examine the corpse along with his fellow examiner Eleanor Bonneville. They identify Neale's corpse and find a flash drive with Jigsaw's voice saying that a new game has started and that four more victims will follow. Unable to believe that John Kramer had returned from the dead, Halloran and Hunt have the flash drive investigated, but it's concluded that it features Kramer's voice. Halloran and Hunt then are called to see an apparent suicide victim who jumped from the hospital, this being the unnamed woman who served as Halloran's informant and having a note which states that three more victims are left.

Halloran then interrogates Eleanor Bonneville. After becoming aware that Eleanor is a member of the Jigsaw fan-site Jigsaw Rules, Halloran interrogates Logan about how he came to meet Eleanor, suspecting her of being the Jigsaw copycat despite the beliefs of the press of Jigsaw having come back from the dead. Halloran and Hunt are left more dumbfounded once the corpse of the unnamed woman is shown to have traces of John Kramer's blood, in addition that Edgar is kidnapped from the hospital without anyone watching. Halloran then has Hunt follow Eleanor and Logan to the former's studio, where it's revealed that she is actually a Jigsaw fangirl with replicas of some of Jigsaw's old traps. The next day, Hunt calls Halloran and tells him that he is at the graveyard as the police captain ordered to dig John Kramer's grave and open his coffin to put an end to rumors that he faked his death. However, what's inside John's casket is none other than Edgar's corpse.

Sure that Eleanor is the copycat and Logan her accomplice, Halloran goes with Hunt to arrest both of them. Once in Eleanor's studio, the pair find some newspaper clips about Kramer before the corpse of the unnamed man who worked as Halloran's informant suddenly falls with a note that two more victims are left. Hunt goes to arrest Logan and ask him about Eleanor's whereabouts, but Logan convinces Keith that Halloran is actually the Jigsaw copycat rather than him, which is further seemingly confirmed when Logan examines Edgar's corpse and finds a bullet from Halloran's gun. Logan then goes to meet with Eleanor while Hunt goes to Halloran's home, where he finds the skin pieces of the new four victims, seemingly confirming Logan's claims that Halloran is the Jigsaw copycat and ordering his men to arrest Halloran upon finding him.

Unknown to everyone, Halloran has actually followed Logan and Eleanor to the Tuck's Pig Farm, a barn once owned by the family of Jigsaw's deceased wife Jill. Once at the barn, Halloran attempts to arrest Eleanor and Logan for organizing the game, but Logan fights Halloran to allow Eleanor to escape. Their fight comes to an end once they are both seemingly subdued by an unknown assailant. They both awake in one of the barn's rooms with Laser Collars attached to their necks. Halloran and Logan are then instructed by a speaker, with John Kramer apparently talking through it, to push a button and confess their sins to avoid being killed by the Laser Collars.

Despite saying that he will go first, Halloran forces Logan to go first by pushing his button, leading Logan to confess his mistake of mixing up the X-rays that caused Kramer's cancer to go undetected until it was too late for him to be cured, but he is still apparently killed by his collar. Halloran is then forced to confess his sins, and to avoid being killed, out of desperation, Halloran confesses the truth about his corruption and that many innocent people died because of him. This causes his collar to shut off, seemingly indicating that Halloran has won his game.

However, while looking at the damaged roof because of the lasers, Halloran discovers that Logan's lasers didn't damage the roof, leading Logan to stand up and reveal that he had faked his death as his collar and blood were fake, in addition to actually being the Jigsaw copycat all this time. Dumbfounded, Halloran doesn't understand until Logan shows him the corpses of Ryan and Anna, two of the five victims, along with Mitch, Carly and Logan himself, who played John Kramer's first game back in 2003.

Logan was going to play, but was spared by John as his sedation took too long to wear off and was taken as his first apprentice. Because of Halloran's corruption, Logan decided to resume the Jigsaw games to enact vigilante justice and avenge Christine's murder, having once talked to John about delivering justice and speaking for the dead. With the recording of Halloran's confession, Logan announces his intentions to frame him as the Jigsaw copycat, as his claims will be backed up by Eleanor to provide an alibi for himself plus the fact that Logan shot Edgar with a sniper rifle back when Halloran shot him but replaced his bullet with one of Halloran's gun to make it look it was Halloran the one who shot Edgar near the heart.

Although Halloran points out that John gave his victims a chance to win his games, Logan states his intentions to not spare his life and proceeds to reactivate the Laser Collar. The Laser Collar ultimately slices Halloran's head open, killing him and avenging all those innocents who died because of his corruption. As Halloran's corpse falls off to the ground, Logan states that he will "speak for the dead" and closes the room's door, sealing Halloran's corpse inside along with those of Ryan and Anna. It's presumed that as of now, Halloran has been incriminated by Logan of being the Jigsaw copycat, so the police will be looking for him, though whether they will ever find his corpse or not to confirm his whereabouts is up to speculate. 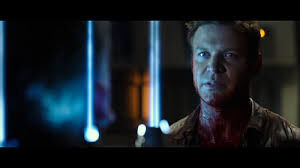 Halloran discovering that Logan Nelson is the Jigsaw copycat before his execution.