Mr. Coach Bradley Buzzcut Vaughan is the secondary antagonist of Beavis and Butt-head (the main villain is Principal McVicker).

He was voiced by Mike Judge, who also voiced other characters in the series, including Principal McVicker and the show's eponymous duo.

He runs a gym class in the high school. He cannot stand the boys tomfooleries in his domain (Gym Class). He used to be a US marine corps drill instructor before he was a physical education teacher, sex education teacher, math teacher and detention supervisor.

Unlike Principal McVicker, who is more sympathetic, Buzzcut is shown to bully students who didn't even do anything to ignite his wrath. Even going so far as to spew out death threats towards the students. The most infamous example was in the episode The Young, Gifted, and Crude, where he encouraged his class to beat up a new student that used to be in the gifted classes. The closest he has ever had to a noble moment was in the episode Candy Sale when he defended Beavis and Butt-head from Mr. Candy, but only because he, in his own words "does the ass-kicking in his classroom." Even though he defended Beavis and Butt-Head from Mr. Candy, Buzzcut shows to be more livid towards Mr. Candy than the duo. 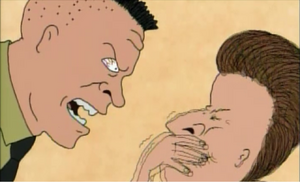 BUT LET ME GIVE YOU A REMINDER, BEAVIS AND BUTT-HEAD THAT SEX EDUCATION CLASS IS VERY, *VERY* FUNNY!!! IT WILL MAKE YOU LAUGH VERY HARDER. OK?!! So if McVicker and I hear even one more laughter out of you two idiots' mouths again before you *WILL* get expelled from this High School and have to go to another Delinquent High School in Highland, Texas again. I WILL SERIOUSLY HAVE BOTH OF YOU DIMWITS' ASSES KICKED AND CUT OFF AND MOUNTED ON PRINCIPAL MCVICKER'S WALL OVER HIS GODDAMN DIPLOMA!!!!! DO YOU UNDERSTAND?!!!!! 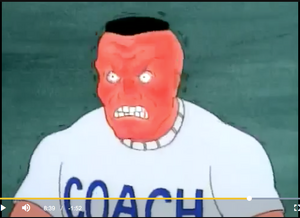 Bradley Buzzcut's raging breakdown as he preps to beat up Mr. Candy.