Win the war against the UNSA (failed).

Captain Bradley Fillion is a minor antagonist in the 2016 video game Call of Duty: Infinite Warfare. He is a former UNSA officer who defected and became a captain in the Settlement Defense Front, and the commander of the SDF carrier Ares Vallis.

He was portrayed by Conor McGregor in motion capture, who also portrayed himself in EA Sports UFC video games.

Born on Earth, he joined the UNSA at a very young age with his twin brother Michael. Unlike his brother who was compassionate, he developed a social Darwinist mindset and went on to hate Earth's policy of neutrality, constantly getting into fights with other soldiers. Agreeing with the the Front's philosophy of force and despising Earth's "weak" politicians, he defected to SDF in his twenties and was assigned to the 8th orbital fleet, eventually achieving the rank of captain. After reaching the rank of captain, Fillion became the commander of the SetDef carrier Ares Vallis, and became an associate of Admiral Salen Kotch.

War against the UNSA

Later, in Operation Port Armour, Fillion was on the bridge of the Ares Vallis when Captain Nick Reyes and his men assaulted the ship. After Reyes blew up the wall of the bridge, Fillion was one of the few who was not sucked into space, instead suffocating before dropping onto the console when the gravity came back on. His card was then stolen by Reyes in order to hack the ship's computer, and the UNSA succeed in defeating the SDF by destroying their shipyard on Mars. 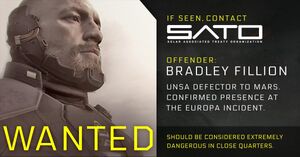 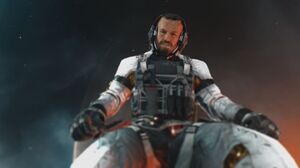 Fillion just as he is about to beat Wolf to death. 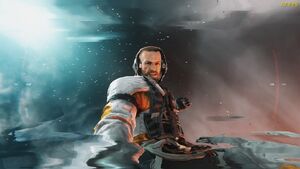 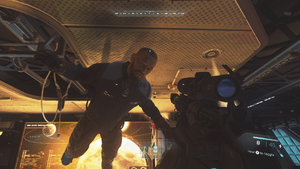