Kill Cameron Vale, Dr. Paul Ruth, Kim Obrist, and anyone that gets in his way (partially succeeded but then failed).
Help Darryl Revok take over the world (failed).

Braedon Keller is the secondary antagonist of the 1981 Canadian science-fiction horror film Scanners directed by David Cronenberg. He is the manager of security for the company ConSec but is secretly a spy working for Darryl Revok. Braedon Keller was portrayed by Lawrence Dane.

Before the events of Scanners, Braedon Keller became manager of ConSec security. However, in actuality he was secretly a double agent working for Darryl Revok, the main antagonist in the movie. Braedon Keller uses his position to throw a blind eye to Revok's criminal activities and helps Revok in an attempt to take over the world.

Braedon Keller is seen with other ConSec members in a room within the ConSec building to discuss the problem of Darryl Revok escaping and killing six of their employees. Keller suggests a program to deal with this issue but Dr. Paul Ruth rebukes him by noting that Revok infiltrated ConSec despite their security and specialization procedures. Ruth suggests using a scanner to infiltrate Revok's organization but Keller counters since any scanner willing to volunteer left after Revok's sabotage. Ruth then replies that they still have one which is Cameron Vale, the main protagonist of the film.

After the meeting, Braedon Keller spies on Vale and Ruth through a camera and decides to meet with Darryl Revok. Keller notifies Revok that Ruth just selected a scanner (Vale) and is aware it is the same one Revok has been looking for. Revok asks what kind of shape is Vale in and Keller says he is able to function but it's nothing to worry about and believes Vale is weak. After Vale gets information on a drug company that is in possession of Revok, Keller immediately informs him that Vale has an informant and is being called back to ConSec. Revok assures Keller that Vale is lying but Keller is concerned that Vale now has evidence that could expose both of them. Revok then suggests that he be the one to interrogate the informant. Keller then asks what he should do about Ruth since if he discusses with Vale, Keller won't be able to interfere. Revok then replies back to Keller that if Ruth knows anything at all he is to kill him. Keller is skeptical because he thought Revok didn't want Ruth dead but is convinced after Revok reassures Keller that he wants Ruth dead.

Keller returns to ConSec and briefly consults with Ruth whom the ladder celebrates about their "success". Keller though states that he is going to interrogate the informant (Kim Obrist, the second main character in the film). Ruth is skeptical about this but is told by Keller is he doesn't like it he can send a letter to the members of the board and that they would love to hear about it. Keller then confronts Kim where he compliments her appearance before asking what is her name. Kim tells him but her name but before she says anything else, she wants to know if ConSec can protect her from Revok. Keller then responds by saying if she tells them about what she knows and if she does Revok will cease to be a threat to anyone. Kim is skeptical however and doesn't believe him saying that Revok's men are everywhere. Keller replies that the only person she should be afraid of is him. Kim then asks why after she came here of her own volition. Keller then states that he believes she is not who she claims to be. When Kim gets up to leave and asks to speak to someone else, Keller then assaults Kim at gun point and reveals his true colors. He tells her he is involved with Revok's organization and states that she was never one of them. Keller then asks why is she here in the first place. Keller than says "Goodbye Kim" and plans to shoot her but Kim subdues him with her telepathy and leaves the room.

Keller then sounds an alarm and finds Ruth alone in a room communicating with Vale through telepathy that the "Ripe" program must be stopped. He then shoots and kills Ruth in the head. Keller then comes across two guards where one of them was affected by Vale's telepathy and grabs the stunned guard asking what is going on. The other guard tells Keller that Vale and Kim escaped. When Vale attempts to telepathically hack into the ConSec computer terminal mainframe, Keller discovers this and orders one of the employees to override the computers maximum security system in an attempt to hurt or harm Vale. However, the employee is unable do so because he states it will erase all data and programs within the ConSec system and he would be unable to do it without the authorization of the ConSec leader. Keller then loses his patience and points his gun at him. He then says to the ConSec employee that this is his authorization and he holds the other two employees in the room at gunpoint. Keller then aims his gun back at the employee and tells him to shut it down or he will kill him. The employee complies and shuts down the system. However, Keller's plan backfires and Vale causes the computer room to overload to explode killing Keller and two other employees. After Keller's death, when Vale meets Revok he asks where Keller is (not knowing that he killed him). Revok then says that Keller died when Vale blew up his computer and compliments him that was very impressive, not really caring that he lost his most valued subordinate.

Keller is a greedy, impatient, opportunistic, ruthless, and arrogant individual who mainly cares about himself with the exception of Darryl Revok. Keller is very paranoid whenever he believes that someone might potentially have evidence that can be used against him. He also has a short temper as he lost his cool when he asked a guard while grabbing him what was going on and pointed a gun at one of the employees and threatened to kill him and other the employees in the computer room if the ConSec maximum security system wasn't turned off. Despite this, he seems to respect Revok and inform him about his brother Vale and his progress to take both of them down. 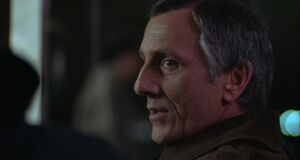 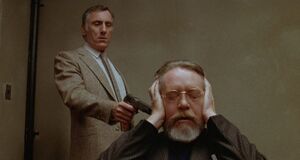 Keller about to kill Ruth
Community content is available under CC-BY-SA unless otherwise noted.
Advertisement