Gaining intelligence.
Deceiving or forcing people into doing his bidding.

Eat the brains of everyone in Endsville (succeeded).

The Brain-Eating Meteor is the main antagonist of the episode "Little Rock of Horrors" of Grim & Evil.

The meteor appeared before a lonely Billy and convinced the idiotic boy through song into bringing everyone in Endsville to it for their brains to be eaten in exchange for its "friendship". Billy fed every human being in town to the meteor without second thoughts except for Mandy, since he considers her his best friend. However, the meteor eventually persuaded him into feeding Mandy to him as well, but after eating her brain the alien died due to Mandy being too evil for it to digest, and Mandy's personality took over the creature, demanding Billy to bring her even more brains.

Well, hello there, little boy! Don't be shy!
Step right up! I'm a reasonable guy!
Don't be frightened by the look in my eye;
I'm just your average evil meteor from outta the sky.

Well, I'm just shy and scared in this place,
I'm just a fish outta water from outer space.
You can see that the trip has left me tired and drained,
So why don't you be a pal... and bring me some BRAINS!?


Go down to your neighbor's place.
See the dull expression on his face?
You'd be doing him a favor if you brought him to me:
He ain't using his brain, he's just watching TV!


Go down to Mr. McGee's:
He hasn't had a thought since '43.
His brain is the portrait of atrophy.
He ain't using it, why not give it to me?


Brains, brains, I won't lie!
I'll eat their brains 'til they're zombified.
Sure they might think it's deranged,
But they won't give it a thought after I've eaten their brains.


Brains, brains, it's okay!
It's not a matter if it isn't gray.
And if at first they thinks it's strange,
they won't think twice if they don't have a brain!


Go down to the Won-Ton Shop,
My fortune cookie says that I just can't stop
I'll suck the noodle right out of their heads
And half an hours later, I'm hungry again!


Creep into the donut stop,
Sneak in, tip-toe past the cop.
Pick me up a cruller and a cupful of tea,
And any other sweetbreads you happen to see.


Brains, brains, I won't lie!
I'll eat their brains 'til they're zombified.
Sure they might think it's deranged,
But they won't give it a thought after I've eaten their brains.


Brains, brains, it's okay!
It's not a matter if it isn't gray.
And if at first they thinks it's strange,
they won't think twice if they don't have a brain!


Brains, brains, I love 'em, I need 'em...
My tummy jumps for joy when I eat 'em.
Big ones, fat ones, short ones, tall ones,
They're so delectable, especially the small ones.
No time to cook 'em in a skillet.
My belly's rumblin', I got a need to fill it.
I don't fry 'em, the heat will only shrink 'em,
I'll just grab myself a straw and I drink 'em!!! (ohhhhhhh...)


You've been swell to go around
And bring me every single brain in town
But with all these brains, I can't help but think
That there isn't one left out there to drink.


Now fess up, boy, come on, heck!
Is there someone that you're trying to protect?
Bring her down here to meet her end
And I promise I'll be your bestest friend.


Brains, brains, I won't lie,
I'll eat her brains 'til she's zombified.
Sure she might think it's deranged
But she won't give it a thought
After I've eaten her brain.
BRAINS, BRAINS, It's okay.
It's not a matter if it isn't gray,
And if at first she thinks it's strange,
she won't think twice
If she don't have a brain! 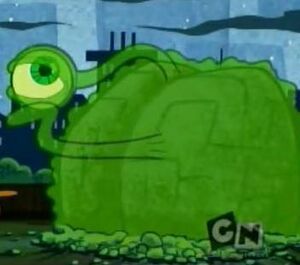 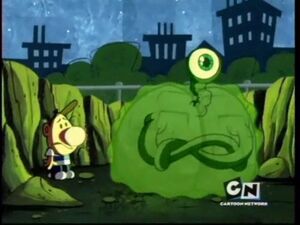