Villains Wiki
Register
Don't have an account?
Sign In
Advertisement
in: Doctors and Scientists, Animals, Anthropomorphic,
and 51 more

Trying to conquer the world.

Abusing Pinky (when Pinky does something stupid).

Conquer the world and make it a better place (ongoing. failed).

The Brain (also known as Brain) is the main antagonist of Animaniacs, as well as the deuteragonist of its spinoff Pinky and the Brain and Pinky, Elmyra and the Brain.

The Brain is a lab-mouse who, upon being mutated in an experiment, gained superhuman intelligence and a desire to take over the world in order to make it a better place. However, despite his numerous claims of success, Brain never ends up succeeding at his end goals, both due to his idiotic partner Pinky and, in some ways, himself. He and Pinky serves as the off-scene and yet self-proclaim (to most fans) arch enemies of Yakko,wacko and Dot.

In the original series and the 2020 reboot, he is voiced by Maurice LaMarche, who also played Lrrr, Morbo and The Big Brain in Futurama, Father in Codename: Kids Next Door, Alec Baldwin in Team America: World Police, Mr. Big in Zootopia, Mortimer Mouse in the Mickey Mouse franchise and sometimes Yosemite Sam in the Looney Tunes franchise.

Brain is a manipulative genius with a calm and overconfident personality. He almost never loses his cool: when Pinky's clumsiness spoils his plans completely, Brain's only reaction is a brief annoyance. He also seems to be egocentric and arrogant in nature. Despite his desire to conquer the world, he truly believes he is doing it so he can make it a better place, and will never resort to murder to accomplish his goals. He does care about Pinky, even though he abuses and threatens him constantly.

There are some world domination plans he refuses to attempt: for instance, he was unwilling to use a plan selling cigarettes to children. Brain's good intentions are emphasized by his rivalry with Snowball, a hamster who also planned to conquer the world, but proved far more cruel. Brain is disgusted by Snowball's methods and goes so far as to save the world from him.

He also loves Billie, a female mouse who loves Pinky more than Brain.

Both Brain and Pinky are laboratory mice who underwent an experiment to make them rational. The experiment had different results on each of them, turning Brain into a super genius, while Pinky also becomes sentient but incredibly stupid. Brain then decided he would use his superior knowledge to take over the world and make it a better place using his intellect. He convinced Pinky to aid him in his plans, and the two of them try a new plan to achieve world domination every night, only for every one of them to fail either because of Pinky's idiocy or some other factor that Brain didn't account for.

In the 2020 series episode, "Roadent Trip", it is revealed that the reason Brain wants to take over the world was due to the cruel experiments inflicted upon him by humans when he was young, giving him a desire to be in total control of his surroundings. 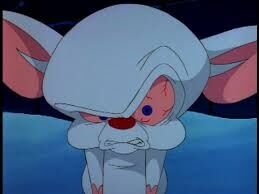 The Brain getting angry 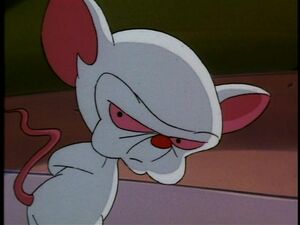 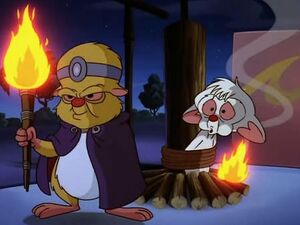 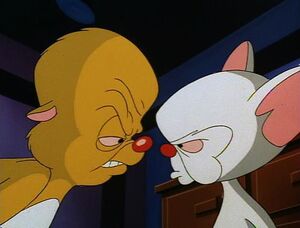 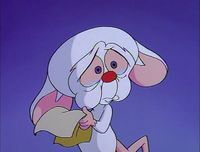 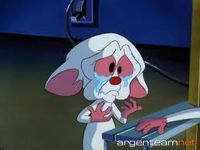 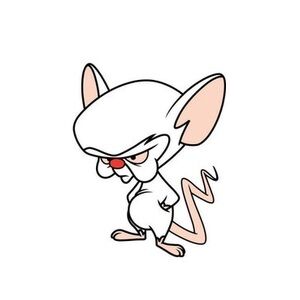 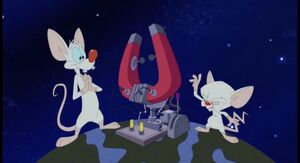 Pinky and the Brain in the 2020 Animaniacs reboot

The Brain in Robot Chicken