Brain Freeze is one of the secondary antagonists of the mobile game Plants vs. Zombies Heroes. He is a zombie hero of Yeti Zombie, who leads Beastly and Sneaky classes.

Not much is known about Brain Freeze's past. However, in his introduction comic strips, he can be seen freezing an entire neighborhood alongside Wall-Knight and Grass Knuckles, who attempted to attack him.

Brain Freeze appeared in Ice Zombie Cometh to turn a waterpark into his own by freezing it. While having fun, Solar Flare used her firepower to defeat him from further trouble.

Brain Freeze can be seen in Battle at the BBQ carrying his jelly plate, until Green Shadow was being thrown into that plate, which made him sad.

Brain Freeze also returned in It Came from the Green House alongside Super Brainz and Impfinity to stop Chompzilla attacking a group of zombie invaders. He managed to defeat her by freezing her mouth.

In Code Orange! Citron Invades!, Brain Freeze, Rustbolt, and Z-Mech came to the moon to stop Citron, Rose, and Grass Knuckles from putting their flag in that place. During the fight, Z-Mech kicked a Spin Dashing Citron and hit both Rose and Grass Knuckles out of the moon.

Brain Freeze also returned in Mini-Golf Standoff alongside The Smash and Impfinity stopping Wall-Knight from interrupting a golf game. He managed to defeat him by hitting him into a hole with a golf stick.

Brain Freeze's ability is similar to the Yeti in the Garden Warfare series. However, he can create a tundra out of it and neutralize the climate in his area. 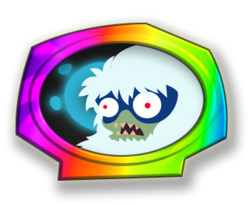 Frozen Tundra
Add a photo to this gallery

Retrieved from "https://villains.fandom.com/wiki/Brain_Freeze?oldid=4145336"
Community content is available under CC-BY-SA unless otherwise noted.