Leader of the Gremlins

Trying to make his species civilized.

Being intellectually superior and civilized.

Take over human civilization and adapt it to Gremlins.
Make plans and ways for his Gremlin species to be civilized (both failed).

The Brain Gremlin is the main antagonist of the horror/comedy film Gremlins 2: The New Batch.

Like Stripe, he becomes the leader of a batch of Gremlins, vicious reptilian-skin monsters one meter tall, and with a highly dangerous and violent behavior on attacking any other life form. There are two rules concerning the Gremlins which are water will make them multiply and bright light, especially sunlight, is harmful to them. Unlike the typical gremlin, he can speak coherently and articulately, and enjoys using complicated and sophisticated-sounding words and phrases. He has intelligence far superior to most of his species and even the average human.

He was voiced by the late Tony Randall, who also played Mr. Grimm in How the Toys Saved Christmas.

In a New York City skyscraper, the mogwai creature, Gizmo, becomes wet, which makes him spawn four more mogwai (Daffy, George, Lenny, and Mohawk). The four mogwai eat after midnight, because if mogwai eat after midnight, then they will turn into Gremlins. They are inside the skyscraper during daylight, which will make them able to be alive until nighttime to escape, because sunlight is extremely harmful and destructive to gremlins.

Brain Gremlin originally started as a normal gremlin, spawned from whether one of the three gremlins, Lenny (the goofy one), Daffy (the crazy one), or George (the gangster one).

He drank a potion called The Brain Hormone, created by Dr. Catheter. The hormone made the gremlin go through a process, where he gained glasses in the process. He then has an increased intelligence and immediately talks to the scientists in the lab (who are too scared to even respond): "I....wanna.....talk a little bit about what's going around in this room because, I think there's some fascinating remications here for the future.

Would you introduce new genetic material research quality to a life form such as ours' which is possessed as a..a sort of..I hesitate to use the word atavism, but let us say a highly-aggressive nature. For example, for that fellow near the..um...I believe that's a common bat of the order Chiroptera, the only mammal I might add capable of flight". He later finds genetic sunblock, the cure for the Gremlins' weakness of sunlight, which will allow them to escape the building unharmed.

He injects genetic sunblock into a gremlin who drank a substance that morphed it into a half-bat hybrid. He instructs the Bat Gremlin to fly out of the building to check if it's sunlight still, and the scientists are unable to catch the Bat Gremlin. Later, several gremlins attack and slaughter people, while the Brain Gremlin helps his team of monsters win, although he doesn't attack people since he develops a fond nature of manners and the desire of having his team civilized.

The Brain Gremlin wanted his species, the Gremlins, to be civilized, the definition is to no longer be primitive and violent, and become more advanced and become an animal race of superiority and power. He explains this when a monster-movie TV show host named Grandpa Fred and cameraman Mr. Katsuji make an interview with the Brain Gremlin. The Brain Gremlin answers that civilization is the answer, explaining that the gremlins are vicious monsters that are primitive and violent because they're not civilized, and shows an example of a gremlin who is annoying and acts crazy next to him, which he later kills with a gun.

He was later seen singing New York, New York with several gremlins (around 200 to 300 gremlins were inside the building), and they were ready to leave the building. However, when they plan to exit the building so that New York City will no longer have human existence and instead replaced by a civilization of gremlins, a human named Billy Peltzer absorbed a gremlin who drank an electric potion (turning the gremlin into raw electricity), into a telephone, and his friends Kate Beringer and Murray Futterman help him to stop the gremlins. Murray sprays the gremlins with water as the Brain Gremlin becomes the first to get blasted by water, and Billy aims the Electric Gremlin at them. The wet gremlins all explode and melt due to the result of electricity and water. The Brain Gremlin tries to finish singing the song New York, New York, with his dying words were "New York... New York..." till his voice was gargling again and lost his human voice, before he fell to the ground dead. 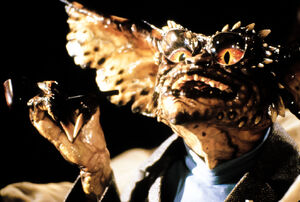 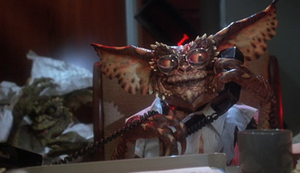