The Brain Roidmude, originally designated as Roidmude 003, is the secondary antagonist in Kamen Rider Drive. He is one of the Roidmudes created by Tenjuro Banno and one of the leaders of their uprising against humanity. He assumes the human form of Sou Noumi to infiltrate the Metropolitan Police Department as a consultant. He at one point fuses with Mitsuhide Nira to become Thief Roidmude (II).

He was portrayed by Shota Matsuhima.

Roidmude 003 was among the initial trio of Roidmudes who murdered their creator, Dr. Banno. They then proceeded to the home of his colleague, Krim Steinbelt, who aided Banno in creating the Roidmudes with his Driviar Cores, to kill him as well. However, unbeknownst to the Roidmudes, Steinbelt's consciousness was uploaded into the Drive Driver upon his death by their hand.

15 years later, all 108 Roidmudes emerged and launched an attack on human civilization which would be known as the Global Freeze. 003 was also the commander and part of the Roidmude onslaught in Tokyo which was stopped by the Shift Cars and Kamen Rider Protodrive. Both Brain, Heart, and Freeze acquired Proto-zero, the defeated Roidmude that sided with Krim Steinbelt and rebooted him (altered his memory as a result) as the Roidmude guardian Mashin Chaser.

Six months later, Brain and Heart remained in Japan to lead Roidmudes stationed in the country. After witnessing Proto-Zero/Protodrive's successor, Shinnosuke Tomari/Drive, Brain became aware of this enemy and for once, poisoned him although he survived. When Mashin Chaser briefly allowed Drive to save the whole city from Volt Ghost's blackout plan, Brain punished Chase but this unintentionally leads him to discover his number, as well as a small portion of his memories. As Chase and everyone wondered the mystery of the formation of Ride Crosser, Brain revealed that Chase had been Protodrive and finally tried to put an end to him until he was stopped by Heart who let Medic reboot Chase again. Witnessing the rebooted Chase's loyalty as a success, he decided to join in the battle until he was burnt alive by Mach Moerl.

Brain gives the other Roidmude commanders the data of the Special Investigation Unit. Figuring that Drive is among them, he planned to attack and/or expose Drive's civilian identity but all of them sarcastically reject it, rendering him nervous. Witnessing Medic's success had been rising up to the point of correcting Chase's brainwashing and founding the Reaper Legion. Envious of her success, Brain contemplated finding her weaknesses even to the point of sabotaging Chase after his remodeling by Medic via weakening his firewall. Though the strategy was a little success, Medic found out about the whole trick and threatened to eliminate him if he tried to get in her way again.

After being bested by Medic, he later aligns with Freeze, often calling him as "Teacher", and introduced himself to the police force as Sou Noumi. He later formulated a scheme, by convincing Go Shijima to meet 001 but declined. As he falls to the ground and seemed to get the upper hand by a desperate Kamen Rider Mach, the Roidmude suddenly took out his iPad, revealing a strange glowing blue screen for Go to see, turning him into the newest part of their faction. In fact, however, Go's memories were altered by 001 to make Go as their trump card in their plans upon to defeat the Kamen Riders, until Go revealed that he is immune to the effect and steals Brain's tablet to rescue his father.

Nira/Thief, with Brain in synchronization targets Yukari Karasawa, one of the eyewitnesses of Eisuke's death until the Kamen Riders rescue her though they did successfully manage to poison her. Nira and Brain later framed Shinnosuke for trying to take the lead of the Roidmudes and with Special Investigation Unit is backing him up. Though Shinnosuke escapes with the help of his friends, Nira/Thief faces him instead and nearly gets himself killed by Drive and Chase, had Brain not using his Super Evolve form. Brain left the injured Chase, telling the latter that he would be a part of a bigger plan that the Executives are constructing.

He is last seen as a number, indicating his Core, at the mercy of fellow Roidmude Medic, the latter of whom would later torture him for all the humiliation he's caused to the Roidmudes, with Heart plotting something about Dr. Banno.

His body was eventually restored by Medic and was set to become a part of Banno's Promised Number, but he was told to stay away from the mad scientist so Banno can never attain the Promised Number. He seemingly surrendered to a later brainwashed Medic after trying to connect to her, as he and his Roidmude cohorts power up Banno's Sigma Circular with their Super Evolved Core Driviars, but sacrificed himself to save Medic with his body and Core dissolving into nothingness afterward.

As his name suggests, Brain acted as the tactical leader of the team. He seemed to be the type that is of the "insufferable genius", as he is easily irritated, like how most of the evolved Roidmudes are, to him, those with a "rude" personality, preferring those that are loyal and wise like him. Aside from his cold personality, he is also calculative, as shown he could simply drip a venomous neurotoxin which powerful enough to kill Drive, had he not been using the Mad Doctor Shift Car.

Ironically, despite his brain motif and cool-headed outlook, he can easily become nervous whenever someone (particularly Medic) does a better job than him. This is displayed on several occasions, for example when Medic did a better job at reprogramming Chase by altering a portion of his base program, thus earning Heart's respect. This results in Brain developing a sense of jealousy towards Medic, and constantly trying to find flaws in her personality in order to redeem himself and regain his comrade's respect. Brain also has a habit of taking out his handkerchief whenever he becomes nervous. It is implied that he treasures his possessions a lot, and losing them would severely affect his emotions.

According to Freeze, Brain's special emotion is "envy".

He also has shown signs of being somewhat sadistic, if his laughter when pitting Mach against Drive and Chaser was any indication. Of course, this is similar to his human synch, Mitsuhide Nira due to both having huge jealousy for their rivals. 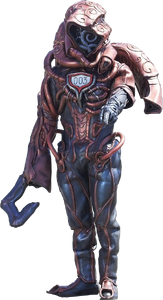