Beastly Dark Form
The Brain Squirrel is an undead squirrel with magical powers. This creature is the main enemy of Zombie Squirrel Attack.

Using its power, the Brain Squirrel raised dead squirrels. These were large, human-sized creatures. They were special in that some of them were able to think and use firearms. But the protagonist, an armed squirrel confronted the undead monsters. They invade a city, but the hero kills them and gets to the cemetery. The evil one lived in a crypt, but the undead at the cemetery tried to stop the enemy, unsuccessfully. The armed squirrel defied the monster and defeated it after a long battle. The creature bleeding from many wounds and exploded.

The Brain Squirrel is a dangerous and powerful creature. It used a slightly higher level of necromancy than average. It raised the dead squirrels, but some of the horde could partially think, so they could use firearms. This creature was capable of create electric rays from its head and was able to create fire with which it could attack. This monster was extremely tough, died only after many shots. 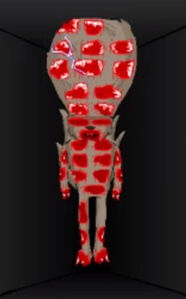 The Brain Squirrel shortly before it's demise. 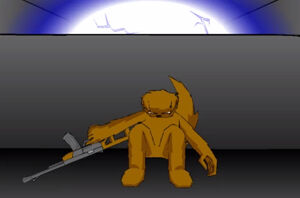 The Brain Squirrel's demise.
Add a photo to this gallery
Retrieved from "https://villains.fandom.com/wiki/Brain_Squirrel?oldid=3602891"
Community content is available under CC-BY-SA unless otherwise noted.