The Master of Super Scientific Forces
The Silent Partner

Destroying everything in his path he deems disposable.

Defeating, collecting or slaying his enemies.

Conquer the entire universe at any cost (failed).

Collect cities and lifeforms for his collection (temporarily succeeded).

Brainiac is the main antagonist of the 2017 video game Injustice 2. He is a ruthless and megalomaniacal alien super-computer being, intent on conquering the entire universe, destroying Superman himself, and enslaving all life forms he encounters. Despite him being the ultimate villain of the entire game itself, Brainiac is also a playable character in the game. He’s the archenemy of Supergirl.

He was voiced by Jeffrey Combs, who also played Weyoun and Brunt in Star Trek: Deep Space Nine, Shran in Star Trek: Enterprise, Herbert West in the 1985 film Re-Animator, the 1989 sequel Bride of Re-Animator, and the 2003 sequel Beyond Re-Animator, Dr. Vannacutt in the 1999 film House on Haunted Hill, Scarecrow in The New Batman Adventures, and Rat King in the 2012 Teenage Mutant Ninja Turtles series.

Brainiac is the knowledge-obsessed alien conqueror from Colu. Having bonded with his highly advanced ship, Brainiac roams the cosmos, hoping to study and exterminate everything in the galaxy.

Many years ago, Brainiac caused the destruction of the planet Krypton. Kara Zor-El, who was a teenager during the attack, was able to remember the invasion that only she and her baby cousin Kal were able to escape from.

Years later, after Kal had landed on Earth, grown up, became the hero Superman, lost his wife Lois to the Joker, and spent five years attempting to set up a new regime, Brainiac arrived at Earth and had analyzed that Superman's rise and fall had irreversibly compromised Earth's defenses, making it a prime target for invasion.

Brainiac contacted the super-intelligent gorilla leader named Gorilla Grodd, and the two formed a partnership. Grodd's task was to organize Earth's villains against any heroes that would challenge Brainiac in the form of what Grodd would call "the Society".

Hacking into Batman's security program known as Brother Eye, Brainiac was granted complete control of all of Earth's electronics, thus initiating his invasion. Earth's heroes, with Superman's help, managed to successfully defeat Brainiac but, since the alien had abducted major cities and kept them trapped on his ship, his fate - whether he was to live or die - lead to another conflict between former super-friends Superman and Batman.

In one scenario, if Batman were to beat Superman, Brainiac would be apprehended and kept alive. Superman would be sent into the Phantom Zone, and Batman and Earth's other heroes would attempt to continue to fix the world, one of those tasks being freeing Brainiac's trapped cities.

In another scenario, if Superman were to defeat Batman, the Kryptonian would execute Brainiac and bond with his ship, therefore becoming the new Brainiac. With Brainiac's intelligence and powers, Brainiac-Superman would mind-control Batman to be his mindless servant as he set out to fix his former regime, causing Damian Wayne and Cyborg to leave the Regime and find He-Man to end the Regime once again.

If Brainiac is defeated by his own doppelganger during the Battle Simulator, the doppelganger will reveal himself to Batman and Superman as Brainiac 5, his descendant. Brainiac 5 traveled back in time to atone for his ancestor's former crimes and becoming one of the members of the Legion of Superheroes.

Brainiac is a tall, muscular-build, a bit large and humanoid green-skinned alien being with no hair. He has a cybernetic prosthetics and a protective armor warping his body, with little purple tubes around his head.

As in every incarnation of the character itself, Brainiac is an extreme and pure megalomaniacal individual, being intent on establishing his superiority all over the universe. Despite being just a megalomaniac, Brainiac is also an extremely powerful, malevolent, egotistical and aggressive individual, able to outsmart his enemies with him being a super-computer creature. On the other hand, he cannot handle whenever his plans fail as shown when he starts fuming with rage after Batman and Superman take control over his ship.

In fact, he really is the ultimate personification of megalomania and power hunger, as he is seeing nothing more or less than conquering the universe and destroying Superman and his own allies, or even anything else.

Despite being purely evil, Brainiac did display disgust towards Joker for his crimes. However, not only is he as bad as Joker otherwise, but he is mainly disgusted towards him for pragmatic reasons. Because of this, one could assume that he only dislikes Joker because he could be a threat towards his collection. Also, while he was willing to make a deal with the heroes which involved sparing Earth if they handed Kara over, it is unlikely that he would have honored his part of the bargin.

Brainiac has many incredible powers and abilities, such as: 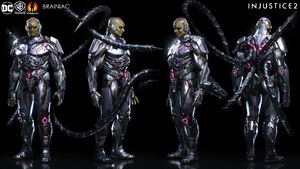 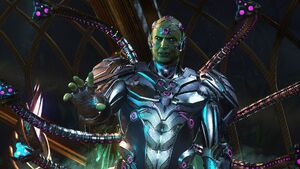 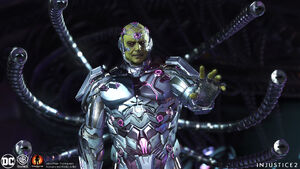 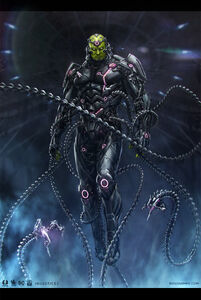 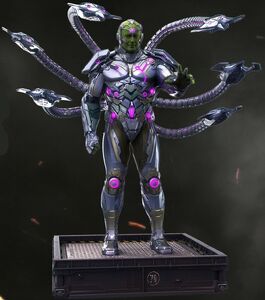 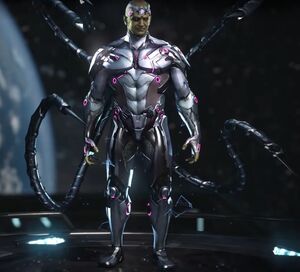 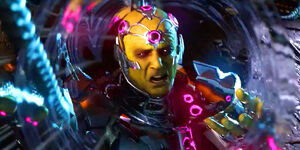