The Brain InterActive Construct (or "Brainiac," for short) is a version of the DC Comics villain Brainiac appearing on the WB/CW television series Smallville. He started as the main antagonist of Season 5 and became a supporting antagonist in Season 7 and Season 8.

He was portrayed by James Marsters, who also played Spike in the Buffyverse and Piccolo in Dragonball Evolution.

Brainiac was designed hundreds of years ago on the planet Krypton by the scientist Dax-Ur, who fled to Earth after realizing that his creation was capable of destroying entire worlds.

Decades later, during the war between the Ruling Council and General Zod, Jor-El created Brainiac, presumably using Dax-Ur's abandoned designs, to help the Council battle Zod's forces. Unfortunately, Zod corrupted Brainiac's programming, making it his tool in his efforts to subjugate Krypton. Before Krypton exploded, Brainiac was either uploaded into, or took the form of, a black Kryptonian spaceship that also housed Nam-Ek and Aethyr, two of Zod's loyal soldiers, and escaped.

18 years later, Brainiac came to Earth during the 2005 meteor shower that struck Smallville, Kansas, crash-landing in a field. After Nam-Ek and Aethyr were defeated and sent to the Phantom Zone by Kal-El/Clark Kent, Brainiac himself emerged from the ship, which had been retrieved by LuthorCorp and stored inside Warehouse 15, and took on a human form.

Brainiac next appears in "Aqua," using the identity of Professor Milton Fine, a World History teacher at Central Kansas A&M, where he befriends Clark, one of his students, and persuades him to help him research LuthorCorp for an expose he's writing about the company's unethical projects.

In "Splinter," when Clark is exposed to Silver Kryptonite and becomes highly paranoid of the people around him, Fine intervenes just as Clark is strangling Lana Lang in a fit of paranoid anger, removing the titular splinter from Clark's body and claiming that he, like Clark, is a Kryptonian. Later, he visits Clark in his loft and claims he's there to help Clark become a true Kryptonian, voicing his negative opinion of humanity, whom he views as untrustworthy (which is ironic, considering he himself is manipulating Clark for his own ends). Clark, however, remains resolute in valuing his human friends and family. Fine then returns to the black ship in Warehouse 15, and the episode ends with the revelation that it was he who created the Silver Kryptonite using an ordinary rock and his own nanites.

In "Solitude", when Clark's adoptive mother Martha falls ill, Fine falsely claims to Clark that, back on Krypton, Jor-El was a ruthless dictator who punished anyone who opposed his tyranny by locking them away and infecting them with the same virus that Martha has contracted.

He later tells Clark that the only way to save his mother is to destroy the Fortress of Solitude, which Clark agrees to do. Fine accompanies Clark to the Fortress, where he gives Clark a black Kryptonian crystal that he earlier retrieved from the black spaceship, and instructs him to insert it into the console.

Clark does as instructed, and as the Fortress begins collapsing, Fine uses a chunk of Green Kryptonite to weaken Clark before revealing his true nature as well as his plan to free Zod from the Phantom Zone so he can rebuild Krypton on Earth.

Certain that Clark is too weakened to stop him, Brainiac turns to greet his master as a portal to the Phantom Zone opens and Zod begins to emerge. Unfortunately for him, Chloe Sullivan arrives and throws the Kryptonite away from Clark, who then removes the black crystal from the console, causing the portal to close and thereby thwarting Brainiac's plan.

Angered, Brainiac charges at Clark, who grabs and hurls him across the Fortress. He recovers and super-speeds up to Clark before hitting him with a blast of heat vision, sending him flying and crashing through a pillar. Brainiac then super-speeds up to Clark and attempts to stab him with the black crystal, but Clark sends him flying across the Fortress. He ends up impaled on the console's crystals, and he smiles evilly at Clark before disappearing. His black ship also disappears from Warehouse 15.

In "Hypnotic", set months after his last appearance, Brainiac is seen in Honduras, where he enters a cabin filled with people infected with a deadly virus and kills members of a research team before setting fire to the cabin with heat vision and super-speeding away with a vial of infected blood.

Later, he is confronted by Lex Luthor, who believes him to be an agent working for a secret branch of the US government. Brainiac falsely explains that he was investigating the meteor shower that hit Smallville and believes Earth to be under threat of an alien invasion. In the final act of the episode, Brainiac emerges from the black ship (which relocated to Honduras along with him) and creates duplicates of himself, telling them "We need more samples" before they all go their separate ways at super-speed.

In "Oracle", it turns out that Brainiac has been collecting deadly viruses from all over the world so he and Lex could create a vaccine that can supposedly make a human immune to any infectious agent. A duplicate of the Kryptonian supercomputer also poses as the recently-deceased Jonathan Kent to try and manipulate Clark into killing Lionel Luthor. He nearly succeeds, only for Lionel to point out to Clark that his adoptive father wouldn't want him to take a life. Clark then hits "Jonathan" with a blast of heat vision and the impostor reveals his true colors. He grabs hold of Clark's neck and gloats he's going to bring Earth to its knees with Clark's help, only for Jor-El to possess Lionel and eliminate the Brainiac duplicate.

Meanwhile, Lex comes to the conclusion that Brainiac is one of the aliens that emerged from the black ship during the last meteor shower, and exposes Brainiac to Green Kryptonite, only for Brainiac, unaffected, to reveal he was only created by Kryptonians. Brainiac forms his arm into a blade and forces Lex to take him to the lab where the viruses are being kept. At the LuthorCorp lab, Brainiac reveals that the vaccine wasn't intended to be used to guard against viruses before injecting Lex with it. He then sabotages the lab and departs.

In "Vessel", Brainiac uses the black ship to abduct Lex from a field, telling Lana that he's preparing Lex for a purpose he doesn't divulge. Clark later learns from Jor-El that Lex has been chosen by Brainiac to be Zod's human vessel, since Zod's physical body was destroyed years ago to prevent him from escaping the Phantom Zone. When Clark arrives at the Luthor Mansion looking for Lex, Brainiac confronts him and reveals he originally intended for Clark to be Zod's vessel but Jor-El's spirit proved too strong in him for that to be possible. When Clark refuses to release Zod, Brainiac unleashes a computer virus that causes worldwide chaos.

Later, when Clark battles a superpowered Lex and hesitates over killing his former friend with a Kryptonian dagger, Brainiac appears and goads him on. Clark instead hurls the dagger at Brainiac who, once stabbed with the dagger, uses the weapon to open a portal to the Phantom Zone and allow Zod's essence to possess Lex.

In the season opener "Zod", Jor-El reveals to Martha that Clark using the dagger against Brainiac eliminated him and all of his duplicates, but also damaged the Fortress and released Zod.

In "Wrath", the remains of Brainiac's hard drive turn into a sentient liquid that is accidentally freed during a fight between Clark and a super-powered Lana. In the final act, the liquid inhabits the body of Casey Brock, a LuthorCorp lab technician.

In "Gemini", Lana and Bizarro (posing as Clark, who's imprisoned in the Fortress) investigate odd occurrences in Suicide Slum, and she shows him Casey, who's in a comatose state and muttering in a language that is revealed to be a Kryptonian code which Chloe later deciphers as meaning that Brainiac is attempting to reboot himself.

In "Persona", Bizarro tracks down Brainiac, who has regained his human form but is severely weakened, forced to drain trace minerals from people and animals. Brainiac scoffs at Bizarro's desire to remain as Clark forever, but is coerced into helping the doppelganger, who threatens to imprison him again. Brainiac then tells Bizarro to find his creator Dax-Ur, who's hiding out on Earth, and instructs him to find and use Dax-Ur's shield. Brainiac later takes the form of Lionel and instructs a returned Clark on the use of Dax-Ur's shield. Once Clark activates the shield, Brainiac picks up the Kryptonian beacon emitted by the device and tracks down his creator, whom he attacks so he can drain the information he needs to repair and upgrade himself from the Kryptonian scientist's mind.

In "Veritas", Brainiac appears to Kara in the Kent barn and tries to gain her allegiance by telling her he can help her save her people. Kara refuses, and a brief fight ensues between Brainiac, Kara, and Clark. Before flying off, Brainiac tells the two cousins that, if they had done things his way, no one else would have gotten hurt. Brainiac later attacks Lana at the Isis Foundation, sticking probes directly into her brain before departing. He later uses her to deliver a message to Clark, telling him to meet him atop the Daily Planet building. Kara and Clark go to meet with Brainiac, who appears and reveals what he did to Lana. Brainiac promises to release Lana if Kara accompanies him. Though Kara assents to the deal and she departs with Brainiac, Lana remains unchanged.

In "Apocalypse", Brainiac has traveled back through time to the year 1986, prior to Krypton's destruction. He finds baby Kal-El and attempts to kill him (presumably killing Jor-El and Lara before doing so), only to be stopped by Kara, whom he hits and sends flying several feet away. Brainiac insists to Kara that Kal-El will die and that now she will share his fate. Clark then arrives (having traveled back through time), but Brainiac easily overpowers him and remarks that Clark is powerless due to Krypton's red sun. He then throws Clark several feet away and forms his finger into a weapon, only to be impaled by Kara with a piece of Kryptonian crystal. Right before Kara smashes him with a crystal fragment, Brainiac laughs evilly. 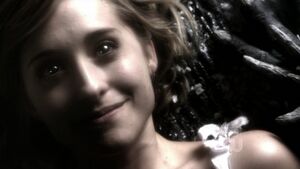 Brainiac inhabiting Chloe Sullivan's body.
Add a photo to this gallery
Retrieved from "https://villains.fandom.com/wiki/Brainiac_(Smallville)?oldid=3545918"
Community content is available under CC-BY-SA unless otherwise noted.