BrainLord (sometimes spelled as Brainlord) is a one-time villain from the 2016 reboot of the Cartoon Network animated series The Powerpuff Girls, only appearing in the eponymous episode. He is a robotic disguise of Mojo Jojo, posing as a fellow superhero of The Powerpuff Girls.

The Powerpuff Girls were in a bind, when fighting Gothra, but it is fortunate that BrainLord stepped in to save them by destroying Gothra with his mighty brain blast. BrainLord introduced himself, saying that he was an alien from the distant planet of Braintopia, which was full of many other large-brained humanoid robots just like him. Their people were obsessed with keeping their glass brain cases shiny, but they made them so shiny that none of them could see anything. Not even the meteor that came toward their planet and destroyed all of them. BrainLord luckily managed to survive, because he was on vacation at the time of the planet's destruction, making him the last of his kind. The Powerpuff Girls invited him over to their house for dinner to thank him for helping them and getting to know him, thinking of him as a new friend.

At The Utonium House, The Powerpuff Girls treated BrainLord with a wonderful dinner, a musical skit dedicated to him, and even a beautiful little welcome basket. BrainLord was so happy with the way they treated him, as this was the nicest anyone had ever treated him. He was quick to brush this off and sneak over to the lab. However, he did not know the password. The hint for the password was "What is The Powerpuff Girls' favorite thing?".

The Powerpuff Girls told BrainLord that tomorrow, they wouldbe showing him all of their favorite things. They took him to the carnival and rode the rollercoaster with him, they rode the carousel, they played knock down the bottles, and they had such a great time. Bubbles mentioned that family was their favorite thing.

BrainLord scurried to the house, entered the word "family" as the password, which allowed him in. He strapped the time bomb to the black hole generator and prepared for its destruction. Blossom called him, saying that they wouldgo out for ice cream and BrainLord thought that he would add just a little more time to the time bomb so that he could have some more fun with The Powerpuff Girls, before he destroyed them. They ate ice cream, fed ducks, went to a salon, put together a puzzle, watched scary movies, frolicked through a field of flowers, and ate more spaghetti. Every time they did something fun, BrainLord added more time to the time bomb.

BrainLord eventually grew too attached to The Powerpuff Girls, when he saw the scrapbook they made for him. Unfortunately, at this time, the time bomb had finally run out, after he forgot to reset it. The time bomb blew up and The Utonium Family and BrainLord were all about to be sucked into it. Professor Utonium said that the only way to stop the black hole was for somebody to detonate a bomb inside of it, which would risk their lives. BrainLord sacrificed himself, now that he actually liked The Powerpuff Girls. As BrainLord went flying into the black hole, Bubbles thanked him and addressed him as "Mojo", revealing that they actually knew who he was the entire time and they were just leading him on. At this point, it was too late for BrainLord to revert back to Mojo Jojo and fight back, so he got sucked into the black hole and blew himself up. 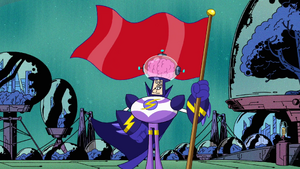 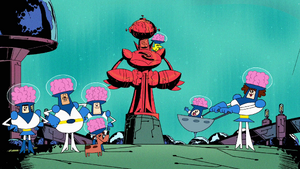 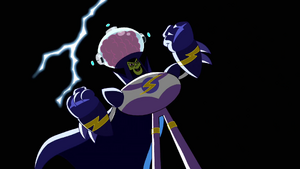