Brand X is an evil corporation and the main antagonistic corporation in the 2012 critically panned animated film Foodfight!.

Brand X is a Nazi-based organization that was introduced to Marketropolis through its representative, Mr. Clipboard. The mascot for the franchise, Lady X, later appealed to the Mayor of Marketropolis, and he allowed her to patrol the city's streets using her massive army. Unbeknownst to the mayor, however, Lady X and her army were actually creating poisons that could permanently kill Ikes, and they planned to use it as a means of taking over the supermarket by replacing said Ikes.

Later on in the film, Lady X led her massive army into a battle with the Ikes, and they manage to slaughter a good bit of them. After Dex had saved his fiance, Sunshine Goodness, from the malicious Lieutenant X, Mr. Clipboard made an unexpected appearance in the grocery store, and he then proceeded to attack Dex and his comrades.

Dex and his friends manage to subdue him, and he then reveals himself as a robot being controlled by Lady X the entire time. Sunshine Goodness then engages in a fight between Dex and the villainous Lady X, and she punches her into being ugly again (somehow). With Lady X out of the way, Dex proceeded to ask Sunshine Goodness for her hand in marriage, and the film then ends with them being wed. 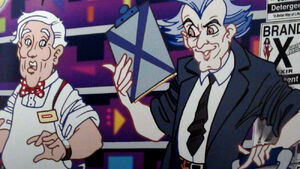 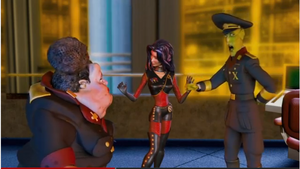 Add a photo to this gallery
Retrieved from "https://villains.fandom.com/wiki/Brand_X?oldid=3683051"
Community content is available under CC-BY-SA unless otherwise noted.