Anti-Villainess
Brandish μ is a minor antagonist of Fairy Tail. She is a member of the Spriggan 12.

She is voiced by Manami Numakura in the Japanese version and by Amber Lee Connors in the English version of the Anime.

Brandish is a young woman with green hair in a bob with bangs cut above her eyes, along with two blue cross-shaped objects attached to the sides of her head like horns. She wears gold cross-shaped earrings. Her standard style of dress shows off the front of her body. She wears something akin to that of a burgundy swimsuit showing her huge bust and a fancy gold coat with purple-indented flower patterns across its design, along with blue fur around the collar. She also wears a gold choker around her neck with chains attached to it, running across her back in a T-shaped pattern. She completes her outfit with a pair of dark brown high heels with purple nail polish coat on her toenails; the Alvarez Empire's mark is on her right thigh.

Brandish is shown to have a very calm, but waspish attitude. She states that she likes cooperative affairs and has shown a desire to avoid conflict when possible, choosing to look at situations logically, although as highlighted by Dimaria Yesta, she can occasionally be quite argumentative, irritable, fiery, and cantankerous, moaning in annoyance or sighing in displeasure when it comes it to anyone, or anything she dislikes. She is fearless of death or torture, piquing her enemies to assassinate her while refusing to disclose any information of herself.

When it comes to her soldiers or underlings, she is somewhat affectionate, sympathetic, and carefree towards them, when ordering them around while justifying that she considers them her "pets", although mentioning she does take care of them if they correctly do her bidding. She is wordly and intellectual, while showing that she can also be quite manipulative, intelligent, and deceptive when need be, as demonstrated when she deceived Lucy into undoing her restraints, ensnaring her once liberated. Additionally, she apparently loves soft and fluffy things, as she was enamored by traveling on Happy once he was enlarged, delightfully hugging him.

Her mother's murder has affected her greatly and her misunderstanding that Layla carries out a dangerous and violent act results in her desire to obtain revenge on the Heartfilias. Despite this, she regrets having to murder Lucy as a way of getting over her death and sheds remorseful tears, as she tries to go through with the act. After traveling to Star Memory with Aquarius and learning the real tragedy behind her mother's death, she fearfully reacts at her murder. Unable to change the outcome these events, she collapses into a overemotional and hysterical fit of tears, showing that even under her unflappable and cool exterior, she is also vulnerable to sadness when it comes to her loved ones.

Also, Brandish can occasionally be mischievous, kittenish, and playful. During their travels to find August, she joyfully used her Magic to make Natsu's head larger because he wanted it and shrinking Lucy's breasts as well as making them bigger. She also said that she has that strong urge to mess with Lucy.

She appears on Caracole Island to buy a Mango Gelato only to see that the store has been destroyed and wants to go back home, but is stopped by Natsu. As result she shrinks Marin and short after the entire island to warn Fairy Tail. At the meeting she's unlike some fellow members not hyped up. When she arrives, she takes a bath in Lucy's house and forces her to join. After the bath Lucy tries to kill her only to be stopped by Spriggan 12 member who reveals Lucy's identity as Layla's daughter and tries to kill Lucy but is stopped by Cana, surrounded by Ajeel's "Sand World", gets hay fever after Ajeel is defeated and is knocked out by Cana. Short after she's captured by Lucy and Cana and imprisoned in the Fairy Tail guild but remains defiant, even stating they should kill her.

When she's imprisoned, her top underling Marin tries to choke her to death, but is stopped by the other Fairy Tail members and imprisoned as well. She then talks with Lucy, revealing spitefully that she believed Layla killed her mother for Aquarius's key after all the loyalty her mother had for Layla, before swiftly overpowering Lucy and restraining her. Although remorseful, Brandish is about to kill Lucy but is stopped by Aquarius, who tells her and Lucy the truth, causing Brandish to break down over her mother's death. Deciding to save Natsu as a favor, Brandish still doesn't want to work with her.

When Jacob invades she's caught in his dimension as well and is freed when Lucy mentions her and decides to stay at the guild imprisoned. Some later she's freed by Natsu and reveals that while August is indeed the strongest male and strongest among them, there is another female Spriggan, Irene Belserion who is equal to August and far, far more powerful than herself, with their skills being effectively well-matched so only one of them could fight on par with the other. Though she has no close relations with Irene and thus cannot do anything before her overwhelming might, she can try to negotiate with August. She, along with Natsu, Happy, Mest and Lucy go to meet August and negotiate. When it appears to work, she stabs August under Mest's control which shocks all present. Shortly after August stands up, knocks her out and tries to kill the four Fairy Tail members.

After Irene used Universe One, Brandish treated August's wound, who explains her the magic. She along with August meet Irene and go together to the Spriggan 12 meeting. On the meeting Dimaria apologizes to her and says to destroy the enermies. Along with the other members she makes herself ready for the battle. She then tries to negatiate with Natsu and Lucy, but then Neinhart appears and overpowers her and Lucy, but is defeated by Natsu. Brandish then enlarges Natsu's tumor and fights Lucy. Although Lucy is able to use tactics and swift shift between Star Dresses to effectively battle her, it soon becomes clear Brandish's far superior magic power is too great and she took control of Lucy's Aqua Metria spell and blasted it at her. Before Brandish could kill Lucy, Dimaria appears and slices Brandish open. She is then treated by Porlyushika. After Universe One dispells Brandish, along with a minimized Dimaria in her hand, retreats to Arakitashia.

One year later, she saves Gray from Madmole and tells about the fates of the Spriggan 12 to Lucy before going to Guiltina where Aquarius' new key is located. She and Lucy agree to part ways as friends when she leaves.

Later, Brandish shows up in the city of Draseal when Lucy and Natsu's team fight the Wood God Dragon Aldoron, upon whose back Draseal lies. Brandish uses her Command T magic to enlarge Fairy Tail member Gajeel Redfox to fight Aldoron after he awakens and rampages. During the battle, Lucy's friend Cana Alberona belittles Brandish after she reveals her spell will only last 3 minutes, causing her to act like a dog as Cana's attitude reminds her of Aquarius, who made her act similarly.

Later, after the defeat of Aldoron, she bathes in the spa at the city of Drameel near the place where Aldoron's body was turned into a forest upon his death. While bathing with Lucy, Erza, Wendy and Fairy Tail's other female wizards, she shrinks them down so as to allow them to enjoy the sauna and have it be larger. However, Brandish quickly becomes bored and leaves to look for sweet desserts in town at a local cafe, causing a panicked Lucy to come looking for her with Natsu and Happy. Her removal of the spell causes no end of trouble for the shrunken girls, who are restored naked in front of their fellow guildmates, much to their chagrin. Afterwards, she decides to leave, telling Lucy she still intends to seek Aquarius' key. She leaves on good terms and bearing a friendly rivalry with Lucy, eager to see which one of them will prevail in their quest first. 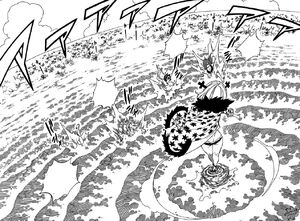 Brandish demonstrating the difference in power between her and Team Natsu. 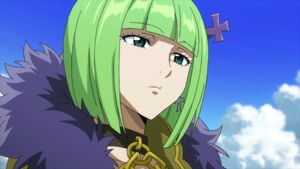