The Branwen Tribe are a group of minor antagonists in the American web cartoon series RWBY. They are a violent criminal band led by Raven Branwen.

It is unknown when the Branwen Tribe was founded, or by whom. It is known that the twins Raven and Qrow Branwen held high authority in the group. When they were teenagers, they were sent to Beacon Academy in Vale to learn combat and how to kill Huntsmen and Huntresses. The two formed half of Team STRQ, which also comprised of Summer Rose and Taiyang Xiao Long. The team eventually graduated and settled down with Taiyang and Raven marrying and giving birth to their daughter Yang Xiao Long. However, when the time came to return to the tribe, Qrow refused, instead preferring his new life as a Huntsman. Roughly ten years before the first Volume of RWBY, Raven ended up learning a terrible truth about Beacon's headmaster Ozpin's past, and was bestowed the power and role of the Spring Maiden. Raven left her family and returned to the tribe alone. Taiyang was devastated, but ended up marrying Summer and giving birth to a second daughter, Ruby Rose.

Raven returned to the tribe and became their leader, running the tribe and leading them on violent raids and attacks. She later formed a friendship and trust with tribeswoman Vernal, who stood in as a decoy Spring Maiden to protect Raven.

Raven meets with Qrow, telling him that she and the tribe are angry at him for leaving, which he does not regret. It is also revealed that the Branwen Tribe has raided multiple villages including Shion, which they had raided, destroyed, and left for the Grimm, killing most of the town.

When Weiss Schnee's airship is crashed in Anima by a swarm of Lancers, Raven and her bandits find her and kidnap her. When she wakes back up at the tribe's camp, Vernal reveals that they usually do not deal in human trafficking, but will make an exception in Weiss' case due to her connections with her father's company. They keep Weiss in a cage and plan to sell her into slavery.

Yang soon comes across tribesman Shay D. Mann, who leads her to the camp. After beating him and another group of bandits up, she confronts her mother and helps free Weiss. Raven allows them to peacefully come into her tent so she can tell them the truth about Ozpin, but they are still on his side. Yang and Weiss then make Raven open a portal to Mistral to reunite with Ruby and Team RNJR.

However, the tribe is soon visited by members of Salem's Faction: Arthur Watts, Emerald Sustrai, Mercury Black, and the Fall Maiden Cinder Fall. They make a deal with Raven to allow her and the tribe to be used by Salem to aid the White Fang in the destruction of Haven Academy in return for letting them all live and Qrow's death. Raven reluctantly agrees.

Raven and Salem's Faction meet the heroes in Mistral, and proceed to battle them. Raven, Vernal, and Cinder escape the fight to make it to the Vault of the Spring Maiden, where Cinder betrays them and kills Vernal, believing her to be the Spring Maiden, to get her powers. Raven reveals herself and battles Cinder in a close and brutal brawl, but eventually overpowers her and blasts her into the abyss, freezing her so she can never return. Raven then mourns Vernal and opens the Vault. 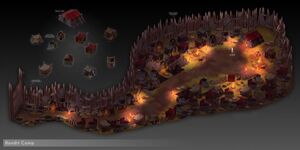 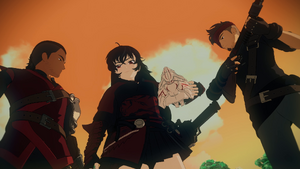 Raven and her bandits discover Weiss. 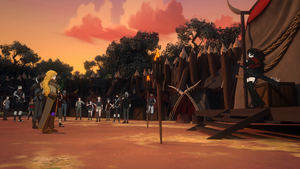 Yang facing off with her mother as the tribe watches. 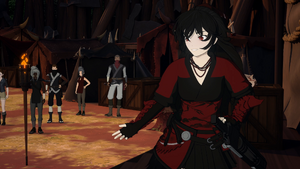 Raven and bandits in the camp. 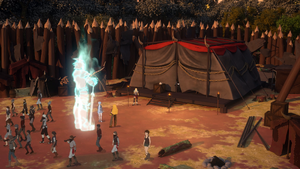 Yang, Weiss, and her Giant Armor avatar in the camp. 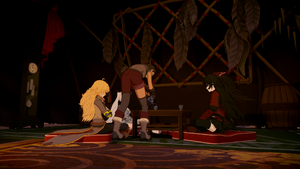 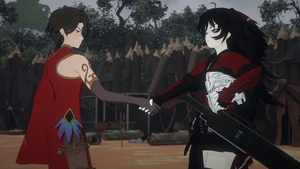