From Dusk Till Dawn

Burning people with a touch

Assist Amaru in her plans

Right Hand Demon
Brasa is the secondary antagonist in season 3 of the horror TV series From Dusk Till Dawn. He is a very powerful demon from Xibalba , known as the Sun God, with the ability to burn things with his hand. He is also the right hand man of Amaru, the Queen of Xibalba.

He is portrayed by Maurice Compte.

Other having pyrotic demonic powers, not much is known about this demon or his early life or whether he was once a human. He is one of the main demons imprisoned in the area of Xibalba where the Twitty Twister club is located.

Brasa is awakened and freed when the club is destroyed by Carlos Madrigal.

He first appears as he meets up with Amaru shortly after she posses Kate. He bows before the queen and they plan on what to do next. He then works alongside Calavera, crashes the Lords’ meetings and with Venganza’s possessed bodyguards massacres the remaining Lords. Freddie, Ximena and Venganza are nearly overpowered until Richie destroys the skulls in Calavera’s base, allowing them to escape. Brasa doesn’t chase after them.

The next day back at Calavera’s base, Brasa retrieves up the amulet (the one stolen from the Geckos’ safe) for his queen. Brasa then goes to the hospital pick up Amaru as she was being help in the hospital and managed to escape. Brasa then goes after all culebras who worship Santanico, as she is a false idol. Ximena understands and tries to explain it to the ranger: With the Lords dead, all the culebra have is their faith. It makes sense for Brasa to want to destroy it, and with it, that last bit of hope. Amaru returns to Brasa and it is apparent being in Kate’s body has restrained her powers, she wanted to stay and fight, but Brasa notes she’s is not ready for it. Brasa presents Amaru with a flyer (the one Ximena saw Brasa looking at earlier) promoting Fanglorious, Scott Fuller’s (Kate's brother) face at the center of it. Amaru can feel Kate “yearning for him” and knowing he is a weakness, orders Brasa to go after him.

Later, Brasa and Amaru still haven’t been able to find Scott and they really want to because killing Scott will quash Kate’s soul and give Amaru full control of the body. But now they’ve found Scott because Kate just found him. While Amaru goes off to Basra to get some healing by chomping on a random guy before practicing her knife skills and demanding they find Scott again because of that whole soul squishing thing. And, of course, they pull out some new monsters to send after Scott. Brasa summons the ancient Aztec Jaguar warriors that hunt by hearing their enemies’ heart beats and then using epic combat skills to slice and dice them. They’re the guards of the sun god as he passes through Xilbalba. Brasa and the Warriors then have a showdown with the heroes and Brasa manage to escape after the Ranger tries to kill him by blowing up the bus he was in. Brasa then unleashes hordes of flesh eating locusts on a town. SAfter the heroes survive that, He and Amaru release some water based monsters on the town. After Amaru escapes from the Seth and Tanner who were captured her at a Amaru loyalist celubra cult ritual, She puts the pressure on Brasa to capture the last remaining Venganza. After earning that Carlos is back, Brasa then orders one of the generals to kill the heroes and retrieve the remaining Lord. Ranger Gonzalez makes a deal with the demon to bring Venganza in exchange for his wife and daughter, who were kidnapped by the Xibalban demon and brought to Amaru's base. As the ceremony for Amaru to bring back her original body using the lord's ashes, Brasa faces off against Seth, who offered to possess him as he was tired of the body he was possessing. Just as Brasa was gaining the upper hand against the Gecko, he uses dirty bombs made with culebra venom to kill Brasa. 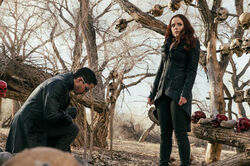 Retrieved from "https://villains.fandom.com/wiki/Brasa?oldid=3534194"
Community content is available under CC-BY-SA unless otherwise noted.