Feed on Emma and Dayday.

The Braun Family were a family of 3 vampires and the eponymous main antagonists of the Are You Afraid of the Dark? episode "The Tale of the Nightly Neighbors".

They were a new family that moved in Emma's neighborhood. Since they are from Eastern Europe, always dressed in black, are active at night and are very pale, Emma and her brother Dayday begin to think that they are a family of vampires. Also, after the new family's arrival, the townspeople begin to suffer from weakness and have neck pains. At night, Emma ventures in the Braun's basement, where she uncovers huge refrigerators full of bottles of blood. When Emma and Dayday meet Mr. and Mrs. Braun in pure daylight, the adults justify themselves by saying that they work at the hospital as paramedics. Then Mrs. Braun asks Dayday if Lex can come and play video games with him. Dayday agrees. The two kids leave, believing that they were wrong about the Brauns' nature. However, in the Brauns' basement, it's revealed that, although Mr. and Mrs. Braun aren't vampires, their son Lex is. Mrs. Braun wakes up his son, that was sleeping in a coffin, and tells him that now that he has been invited by his new victims, Emma and Dayday, he can feed on their blood. In fact, a vampire must be invited in order to enter into other people's home. The episode ends with the whole Braun Family laughing evilly.

It is quite likely that Mr. and Mrs. Braun are not Lex's parents at all, but rather human servants of Lex who protect him during the day and pretend to be his parents to throw off suspicion. This is shown by the fact that, at the end of the episode, Mrs. Braun refers to Lex as "Master."

A couple years after the episode premiered, a novelization of it was published which expanded the plot and gave it a happier ending. In it, Lex bites Dayday as well as his and Emma's parents, but Emma manages to escape. She goes into hiding for the next day, discovering that she is almost certainly the only non-vampire left in the town. She learns in a book on vampire lore that if the head vampire (Lex in this case) is destroyed, all the other vampires he or she infected will return to normal. She sets out to destroy Lex. When the other Brauns are distracted (Mr. Braun was locked in a room by Emma, and Mrs. Braun eventually set out looking for him), Emma breaks into their basement late in the afternoon. It takes long for Emma to break through the lock to the area where Lex's coffin is hidden, so by the time she worked up the nerve to stake Lex, the vampire boy has managed to wake up. He backs Emma up against a basement wall, intent on sucking her blood. This, however, turns out to be a trick Emma had prepared as a "Plan B" in case things didn't go well. She reaches up and yanks down a blanket she had pinned to the wall, revealing a basement window she had covered to trick Lex into believing that night had already fallen. The last rays of setting sunlight pour through the window and into the basement, burning Lex to ashes. Emma's family and the rest of the infected townspeople do indeed return to normal, and Mr. and Mrs. Braun leave town, never to be seen again. 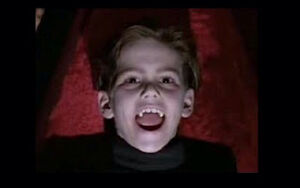 Lex in his coffin 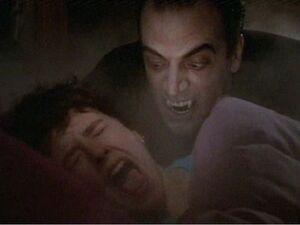 The Brauns laughing evilly
Add a photo to this gallery
Retrieved from "https://villains.fandom.com/wiki/Braun_Family?oldid=3328947"
Community content is available under CC-BY-SA unless otherwise noted.