Villains Wiki
Register
Don't have an account?
Sign In
Advertisement
in: Honorable, Male, Related to Hero,
and 25 more

Reconcile with his brother Christian (succeded).

Braxton Wolff is the secondary antagonist in the 2016 movie The Accountant.

Braxton is the younger brother of the film's protagonist Christian and is a hitman working for the main antagonist Lamar Blackburn, eliminating everyone posing a threat to Blackburn. His position forces him to go up against his brother who is investigating embezzlement in Blackburn's company.

He was portrayed by Jon Bernthal, who also played Al Capone in Night at the Museum: Battle of the Smithsonian, Shane Walsh in AMC's The Walking Dead, Grady "Coon-Ass" Travis in Fury, The Punisher in Netflix's Daredevil and The Punisher, Trigon in Justice League vs. Teen Titans, Cole D. Walker in Ghost Recon video games and Johnny Boy Soprano in The Many Saints of Newark. As a boy, he was portrayed by Jake Presley.

Braxton is the younger brother of protagonist Christian Wolff. He was the only one in the family who could cope with his elder brother's autism and had a good relation to Christian. Their mother, however, could not deal with the situation and eventually left the family. This caused a severe hate for his mother in Braxton.

Their father, a U.S. soldier, trained both Christian and Braxton in self-defense, multiple fighting styles and shooting. At one point, their father drove them to a place where bullies in their school were known to hang out and Braxton and Christian severely beat up the bullies together.

His mother later married again. When she died, Christian and their father visited the funeral where they were to be removed as the funeral was only for members of the woman's new family. The situation erupted in a fight and when deputy's arrived they intended to shoot Christian. However, Christian's and Braxton's father stepped in the way, giving his life to save Christian. After Braxton found out about his father's death and the arrest of his brother, he started blaming Christian for the death of their father.

Braxton is employed to stop a company from making profit by discrediting their European competitors - forcing said competitors to fire their workers. Braxton accomplishes this by threatening a high-ranking official of the company in his own car. The man reluctantly agrees after being hit by Braxton multiple times and Braxton leaves the car without harming him further.

He is later hired to eliminate Ed Chilton, the CFO of robotics corporation Living Robotics. Braxton stealthily enters Chilton's house with two henchmen and waits in the kitchen until Chilton gets home. Once Chilton arrives, he leaves Chilton a choice - Chilton will administer himself an overdose of insulin, thus dying in piece and his wife, who is sleeping upstairs, will receive a large sum of the insurance, or he will refuse and fight, forcing Braxton to kill him and his wife to leave no witnesses. Chilton decides to commit suicide and kills himself with insulin in order to save his wife. Unbeknownst to Braxton, Living Robotics was investigating internal embezzlement. With Chilton's suicide, the hired accountant, Braxton's brother Christian- who is tracking insider financial deceptions for numerous criminal enterprises- is only more determined to solve the case.

Because of Christian's investigation, Braxton is tasked with eliminating him and accountant Dana Cummings who initially discovered the embezzlement. However, he does not know that his target is his own brother. The two henchmen Braxton sends to kill Wolff are swiftly killed, warning Christian that both his and Dana's lives are in danger. After he is informed that all assassins have failed, Braxton is annoyed but agrees to deal with Wolff himself. However, before he can do so he is tasked by his employer, Lamar Blackburn - the owner of Living Robotics - to kill Lamar's sister Rita. After he has done so, he leaves Rita's house just as Christian, who has deduced Rita's involvement, appears. Not recognizing his brother, Braxton fires at Christian but misses and escapes as Christian dives for cover.

Knowing his brother's powers, Braxton advises Blackburn to leave the country for his own safety which Blackburn declines so instead, Braxton and his men start patrolling and guarding Blackburns mansion. When Blackburn voices his discomfort, claiming that the men should better guard Wolff's house instead, Braxton listens with disgust, especially when Blackburn calls Christian a freak. Although Braxton is unaware that his brother is the attacker, he is still disgusted by that word as his brother was often called that way in the past. That night, the mansion is indeed attacked by Christian. When one of Braxton's men outside is taken out by Christian, the sound of the shot alerts the men inside. Christian then shoots at the building with a sniper rifle, forcing everyone to the ground. Meanwhile, Braxton has deduced where the attacker is located and plans accordingly. He sends four of his men outside to deal with Christian, advising them to use smoke grenades to cover themselves. Braxton even sends out the man tasked with surveillance, taking a seat behind the monitor and observing the camera feed himself.

All of the guards heading outside are taken out by Christian who then enters the house and starts eliminating the rest of Brax' men. Through the camera feed, Braxton watches as Christian eliminates another of his men and also recognizes his brother as the attacker. He immediately orders his last remaining man to cease fire but he disobeys the order and is shot by Christian. Braxton then heads down into the living room where the two brothers are confronted. Braxton is shocked to see that his brother is the attacker. Braxton then furiously starts attacking Christian, blaming him for the death of their father as none of them were supposed to be of the funeral of the mother who left them.

While fighting and beating up Christian, Braxton lets out all his anger and grief of being betrayed by his brother and father and claims that Christian knows nothing about him and what he had to face when his family left him. Although he does not fight back at first, Christian eventually throws Braxton to the floor and draws his gun. However, he does not pull the trigger and eventually slides to the floor near his brother. Braxton bitterly blames Christian for asking their father and not Braxton to accompany him to the funeral as he should have known that Braxton would have his back. That moment, Blackburn enters the room, having listened to the brother's conversation through the surveillance feed. Blackburn tries to reason with Christian, telling him that his company is saving lives, but Christian shoots him in the head. After Blackburn's death, the two brothers come to terms. Christian stands up and leaves and Braxton asks where he can find Christian. Christian replies that he won't and that Christian will find Braxton instead. Indeed, Christian sets out to find Braxton at the end of the movie. 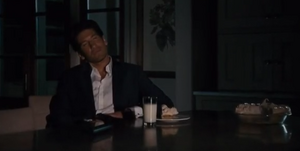 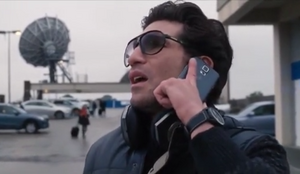 Braxton is informed about the failure of his henchmen 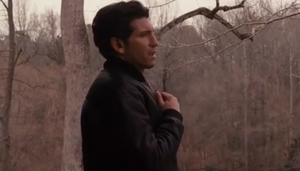 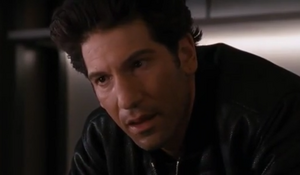 Braxton is annoyed with Blackburn insulting his brother 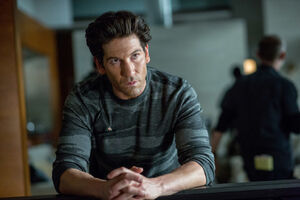 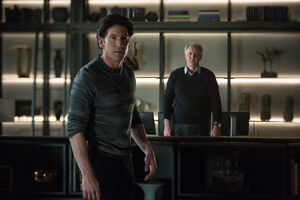 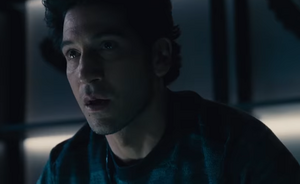 Braxton realizes that his brother Christian is the attacker.