Disciple of Sister Abigail
Leader of the Wyatt Family

Athleticism
Theatricality
Manipulation (Has the ability to manipulate and persuade innocent minds to accept his cult-like beliefs.)
Claimed to capture the abilities of both the Undertaker and Kane.

Grasp the world in his own bare hands.

Bray Wyatt, formerly known as Husky Harris, is an antagonist in WWE and formerly, in NXT. He follows the cultic views presented by Sister Abigail, a fictitious person who said to have changed Wyatt's views of the world. This inspired him to change the world's "wicked" ways and turn to the real actions.

He is the leader of the Wyatt Family, a villainous stable that focuses on the Apocalyptic prophecies of Sister Abigail, along with Luke Harper, Erick Rowan, Braun Strowman, Randy Orton, and formerly, Daniel Bryan. His macabre gimmick became a spotlight to WWE that was comparable to that of The Undertaker and Kane.

Following the break-up of the Wyatt Family, all members competed in singles competition. In the summer of 2019, Wyatt debuted a new persona, known as "The Fiend." At Crown Jewel 2019, he became the Universal Champion (his first reign) after defeating Seth Rollins in a falls count anywhere match.

Upon his debut as Bray Wyatt, he wore a somewhat Hawaiian-themed dress shirt unbuttoned which would trivially change in almost every other match. Underneath his shirt, he wears a sleeveless shirt that he would wear usually in competing in-match. He wears white pants and leather snake-skin boots. In his feud against Roman Reigns, his appearance would change, wearing a leather apron and a white mask (resembling a butcher). In his feud against Undertaker, he wore a black trench coat in replacement to his dress shirt. He was also known to wear a black mask design with teeth upon his returning feud against Roman Reigns and Dean Ambrose.

In entering matches, he would carry a candle-lit lamp that remained as his trademark ever since. He usually wears a leather glove on his right hand. He would also wear his signature straw fedora hat.

He got his first defeat from the Rhodes brothers (Cody Rhodes and Goldust) in a tag team match.

Debut in WWE and feud against Kane

In the 27th of May 2012, the Wyatt Family (original members consisting Wyatt, Harper and Rowan) sent cryptic vignettes in WWE, signaling their debut to the roster. The Wyatt Family debuted through the assault of Kane. This signaled a feud between the Family against Kane. The feud ended when Bray Wyatt defeated Kane in Summerslam 2012 with the interference of fellow Family members Harper and Rowan. They then dragged Kane off away of the ring and into backstage.

Bray's next feud was against WWE wrestler Kofi Kingston, which ended when Wyatt defeated Kingston in Battleground 2012.

Wyatt Family's feud against The Shield

First Disbandment of The Wyatt Family

On the 29th of September 2014, Bray Wyatt released Luke Harper and Erick Rowan of the stable, stating that he has "cured" them and sent them to the world, like wolves among the sheep. This signaled the Wyatt Family's first disbandment. Bray Wyatt targeted Dean Ambrose, stating that Wyatt himelf can cure Ambrose just as he cured Harper and Rowan. This sparked a feud between Wyatt and Ambrose. At Survivor Series 2014, Bray Wyatt defeated Dean Ambrose via disqualification due to Ambrose hitting Wyatt with a steel chair. The feud elevated and continued until in TLC: Tables, Ladders and Chairs 2014 when Wyatt defeated Ambrose, thus concluding the feud.

Bray Wyatt had a short reunion moment with Harper and Rowan at Royal Rumble 2015 when Harper teamed with Wyatt in eliminating various wrestlers, and Rowan attacked Harper and Wyatt as of Rowan's feud against Harper.

His feud against The Undertaker

After Royal Rumble 2015, at an episode of Raw, Bray Wyatt released cryptic messages stating that he is "The New Face of Fear". At Fastlane 2015, Wyatt mocked The Undertaker's traditional entrance, where upon a casket carried by the druids, Wyatt came out. This signaled a feud between Wyatt and The Undertaker which went on in Wrestlemania XXXI. It concluded with The Undertaker winning the match after delivering his signature Tombstone Piledriver unto Wyatt.

Later at Hell in a Cell 2015, Bray Wyatt, along with the reunited Wyatt Family members and new Family member, Braun Strowman, attacked The Undertaker after his match against Brock Lesnar. The Family carried the unconscious Undertaker with them backstage.

The following night on Raw, the Family were attacked by The Undertaker's brother, Kane. However, the Family were able to attack against Kane. Now unconscious, the Family dragged Kane backstage just as they dragged Taker. Bray then announced that he has tortured the souls of the Brothers and has possessed their abilities.

9 November, in which it was a Raw episode, both Undertaker and Kane emerged to attack the Wyatt Family, proving Bray to be wrong about "torturing" the brothers eternally. The feud even went as far as Bray possessing The Undertaker's druids and attacked both brothers. The feud ended when the Brothers of Destruction went to face off against the Wyatt Family (represented by Bray and Luke Harper) at Survivor Series 2015, which the Wyatt Family ended in a losing effort.

Feud against the ECW Originals

On the following night on Raw, The Wyatt Family (represented by Harper and Rowan) defeated The Dudley Boyz. This signaled tension between the two. As a result, The Dudleys called in allies whom they considered their own "family". Bray went on along with The Wyatt Family in the feud against the Dudley Boyz. The feud ended when both stables fought at TLC: Tables, Ladders and Chairs 2015 in an Eight man Tag Team Elimination match, with which the Wyatts went victorious.

When Royal Rumble 2016 was focused, The Wyatt Family, still led by Bray himself, assaulted both Big Show and Ryback in the middle of the match. Wyatt declared his entry to the Rumble along with fellow Wyatt Family members Harper, Rowan and Strowman, stating that they will take over.

At The Royal Rumble, Bray entered at entry number 27. He was unsuccessful in claiming the WWE World Heavyweight Championship as he was eliminated by Sheamus and the returning Triple H.

Bray Wyatt would appear in Wrestlemania 32 alongside with the Wyatt Family (excluding Harper due to major injury on March 21), facing both The Rock and John Cena, wherein The Rock would win over The Wyatt Family's member Erick Rowan over an impromptu match that lasted 6 seconds.

On an episode of Raw, The Wyatts would then unexpectedly attack another villainous stable, the League of Nations. On the next week's episode of raw, both Wyatt and Roman Reigns team up against two of the opposing stable's members (Sheamus and Alberto Del Rio respectively) in which they won.

Wyatt would then fight against his latter tag mate, Reigns on a live event. This resulted to Wyatt injuring his right calf, thus pulled off from WWE for a certain time. The injury was also the reason behind the discontinuation of The Wyatt Family - League of Nations Feud.

Return from Injury, Return of the The Wyatt Family and Feud against New Day

On the 20th of June, Wyatt made his unannounced return to WWE from his recent calf injury. He, along with the other remaining members of the Wyatt would then enter in a feud against the WWE Tag Team Champions, New Day after Wyatt being interrupted of his speech.

The Wyatts and New Day would then face off in a barren field supposedly said to be the "Wyatt Family's Compound", uncertain on which side won.

Matt Hardy Feud and Deleters of the World

In November 2017, Wyatt began a feud with Matt Hardy, after losing a match against him. Over the course of two months into 2018, Wyatt continued to dominant against Matt Hardy, back and forth. However, on the March 19 episode of Raw, both faced off in the Ultimate Deletion match. Wyatt was defeated after Hardy was pushed into the "Lake of Reincarnation," where his status remained unknown until WrestleMania 34 in New Orleans.

After not appearing in the ring since November 2018, Wyatt was in hiatus for a while. After Wrestlemania 35 in April 2019, some of his "friends" were teased on the air. On the very first episode of "Firefly Funhouse," it marks the return of Wyatt. However, after nine weekly episodes, Wyatt teased a new alias, as the "Fiend."

He claims to have an array of dark-powers, such as brute strength, speed, stamina & wrestling skills. He also have made claims to be able to walk on water. He also seems to have the powers of mind control, mental powers, shadow powers and elemental powers. He has a bloated messiah complex, which is his greatest weaknesses. His lantern also allows him supernatural powers & allows him communication with his mysterious "Sister Abigail".

Even though Bray Wyatt claims to be a monster, he is also right about many facts he talks about, further fueling his messiah claims.

After kidnapping The Undertaker back in Hell in a Cell 2015 and Kane in an episode of Raw, he claimed and proved to have to the abilities of summoning Thunder, Lightning and Fire, saying he had tormented their souls too much he had recieved their abilities. 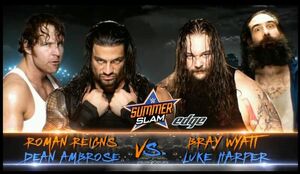 reunited with Luke Harper]] to face Dean Ambrose and Roman Reigns of Shield at Summer Slam 2015. 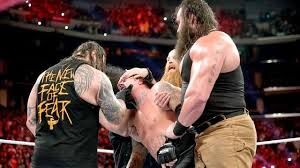 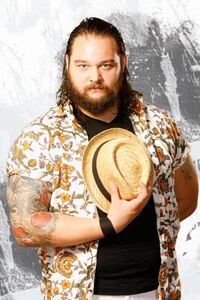 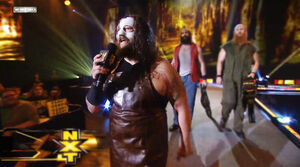 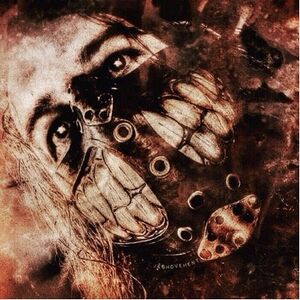 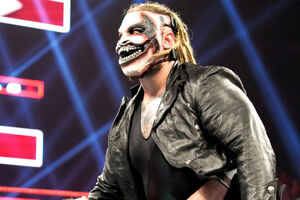 Wyatt returning to the ring, as "The Fiend" 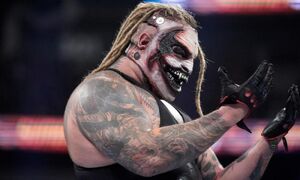 Retrieved from "https://villains.fandom.com/wiki/Bray_Wyatt?oldid=4318264"
Community content is available under CC-BY-SA unless otherwise noted.