Transforming into a vehicle

Help Megatron and the Decepticons win the war against the Autobots.

While initially a scout crippled by paranoia while on Cybertron, Breakdown became a Decepticon brute whose weapons include two built-in hammers - as well as being Knock Out's best friend and Bulkhead's archnemesis. Despite this, he is shown to have a healthy degree of respect to both friend and enemy alike.

In "Operation: Breakdown", he was captured by a human terrorist organization called M.E.C.H. - as their head commander named Silas seeks to learn from his parts. M.E.C.H. soon begin to dismantle Breakdown when Silas orders his surgeon to "open him up", starting with his eye. Eventually, Bulkhead arrived to rescue Breakdown before they could go anything else. The two worked together in defending off M.E.C.H. mercenaries until Silas called in a retreat when detectors were summoned on raider; at first they assumed it was the Autobots joining the battle, but instead it turns out that Megatron's second-in-command Starscream had led a rescue mission with his Vehicons. Although Breakdown pointed out that Bulkhead rescued him, Starscream nonetheless ordered him to eliminate his nemesis. Breakdown momentarily hesitated before proceeding to relent in the end, as he attacks Bulkhead. However, Bulkhead managed to best Breakdown before using his body to bash the Vehicons. The battle looks set to continue when the Autobots arrive just as Starscream begins to attack himself. This forces Starscream and the Vehicons to retreat, shortly before Breakdown follows them out of the Autobots way. Breakdown thereafter heads back to the Nemesis, though not before Starscream halts him to give him a reminder that his rescue has impacted the fact that Breakdown will eventually have to choose which Decepticon leadership he will stand up - Megatron's or Starscream's. At the same time, Silas discloses that M.E.C.H. is making progress with their agenda despite Breakdown being able to evade their captivity.

As seen in "Metal Attraction", Breakdown took to wearing an eye-patch as a reminder of his failure. When Soundwave detected a magnetic signature, Breakdown saw the chance to redeem himself and insisted on retrieving the polarity gauntlet. Once there, however, he found himself under attack by Airachnid - who also coveted the device and made a failed attempt to trap him underground. They fought over it until Arcee and Bulkhead arrived to seize the relic on the Autobots' behalf.

As the two Autobots and two Decepticons receptively battled each other, Breakdown was able to use the gauntlet to magnetically stick the two Autobots together. He then left the scene and started to request a ground bridge on his way back to the Nemesis, but ended up getting ambushed by Airachnid and consequently webbed him to a derelict gas station. He was freed when the Autobots turned up and the gauntlet was triggered, yanking him off the wall. At one point during the following battle, he got hold of the weapon and used it to hit Bulkhead with an oil derrick. After some more fighting, Airachnid tried to make a getaway with the gauntlet and Bulkhead threw her at Breakdown. Breakdown was forced to return to the ship without the gauntlet, but made up for it by presenting Megatron with Airachnid, who had become stuck to his back.

In "Crossfire", Breakdown was sent by Megatron with his first lieutenant Dreadwing on a mission to terminate Airachnid. Despite admitting earlier that he was "intrigued" by her, Breakdown was the first to attack Airachnid. She managed to lure him into a trap where she sliced into his body and decapitated him. This killed him and his remains were later discovered by M.E.C.H to the point where they take them to Silas.

Afterwards, in "The Human Factor", M.E.C.H used his body to create a shell and life support system for Silas - who had earlier on been critically injured following a battle with the Autobots. Silas tried to convince Megatron to allow him to take Breakdown's place "at the table", to which Megatron tested his usefulness by sending him to go kill the Autobots' human child allies - starting with Raf as the latter was a critically intellectual ally to the Autobots.

Once Silas failed after Bulkhead and Smokescreen intervened, Megatron dismissed him saying he was no longer useful. Knockout and Starscream then tortured, dissected and experimented on Silas out of both revenge and to discover further knowledge of Human biology until they accidently used a mix of Dark and synthetic energon to bring Breakdown back to life as a zombie. The Breakdown/Silas zombie wandered the halls of the Nemesis, converting many Vehicons before being killed by Airachnid, again... However, he managed to infect her before his passing; the mangled body of Silas also thanked her for putting him out of his misery before dying.

Following Silas' death and the end of Airachnid's rampage, nothing more has been notified about Breakdown and it is more than likely that his legacy has been all but quashed in the end. 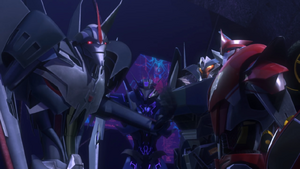 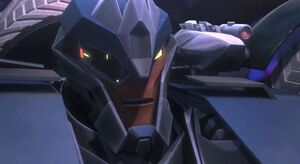