The first Breathtaker was an albino dwarf who was deserted by his own parents. His appearance had made him a target of bullying throughout his childhood and early life. To fix this problem, he created an exoskeleton power suit that allowed him to be viewed as an average person. Due to everything that happened to him, he despised humanity as a whole and would create the Breathtaker identity. He would then become a significant and very influential figure in the underworld and spread terror.

Breathtaker would make his first appearance as the leader of the Assassination Bureau, which was a mercenary organization. His operatives included the supervillains Bazooka Joan, Incognito (DC), Mindboggler and Stratos (DC). Breathtaker's organization would be hired by the 2000 Committee to capture the superhero Firestorm. He would send all of his agents to apprehend Firestorm in an extended game of cat-and-mouse. However, all of his operatives failed which prompted Breathtaker to personally kill Firestorm. He battles Firestorm but would be defeated and captured. Firestorm would then destroy Breathtaker's organization headquarters and later defeat the 2000 Committee.

The second Breathtaker was the leader of a group of supervillain mercenaries and assassins called the Hangmen (this Breathtaker has no relation to the first Breathtaker). The other members of the team were Provoke, Shock Trauma, Stranglehold and Killshot. Breathtaker's group were hired by nationals of Qurac, a country in the Middle East, to assassinate Cheshire. The Hangmen would target Cheshire's daughter Lian Harper but she gets saved by her father, Roy Harper, who goes by the superhero name Arsenal. Breathtaker and the Hangmen would get defeated by the Titans but they would encounter them again.

Breathtaker and Stranglehold were later members of Circe (DC)'s army of supervillains. Afterwards, the Hangmen join forces with the Secret Society of Super Villains. The Hangmen had used the Society's assault on Metropolis as a diversion in order to loot the city. However, Doctor Psycho would discover their treachery and sent members of the Society to kill them. Breathtaker and the rest of the Hangmen get killed with the exception of Stranglehold, who would later appear in Salvation Run.

However, their deaths were merely a ruse and all of the Hangmen were alive in Final Crisis Revelations. It was revealed that Doctor Psycho assisted them in faking their own deaths in order to continue their criminal operations without being detected by the superhero community. The Hangmen would be offered membership by Libra (DC) in his own Secret Society of Super Villains but were interrupted with the arrival of the Spectre. Libra escapes but Breathtaker and the rest of the Hangman are murdered by the Spectre. 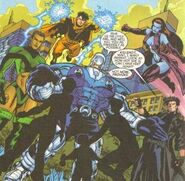 Breathtaker II and the Hangmen with Libra 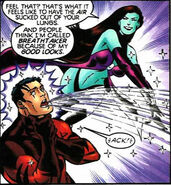 Breathtaker II
Add a photo to this gallery

Retrieved from "https://villains.fandom.com/wiki/Breathtaker_(DC)?oldid=3526188"
Community content is available under CC-BY-SA unless otherwise noted.