This article is about the villain from The Adventures of Sonic the Hedgehog animated series - for information on her Archie Comics counterpart see Breezie the Hedgehog.

Breezie Hedgehbot Robotnik, better known as Breezie, is a feminine hedgehog robot which served as a secret agent for Dr. Robotnik. She is flirtacious, seductive (for a Hedgehog), rude and a bit spoiled.

Breezie was designed to distract Sonic so that Dr. Robotnik could steal all of the water from Mobius' reservoir and she followed her task to the letter until she found herself geniunely touched by Sonic's affection (especially when he wrote her a poem) - this caused Breezie to go against Dr. Robotnik and help Sonic.

The episode ends with Breezie having left presumably to sort her life out again - having Tails give Sonic a letter that stated her hopes that they would meet again some day.

Breezie Hedgebot Robotnik is a voluptuous robot hedgehog from Adventures of Sonic the Hedgehog. Breezie resembles a tall sea-green hedgehog with dark blue hair, brown eyes and red dress. She is flirtatious, seductive, stubborn and a bit spoiled. She was originally a Secret Agent working for Dr. Robotnik.

Breezie Hedgebot Rbotnik was created by Robotnik as a trap for Sonic. She was placed into a peril, leading Sonic to rescue her. Sonic then fell in love with her, leading Tails to become jealous. When the time came for Breezie to eliminate Sonic, she found she could not do so as she had come to care deeply for him. She betrayed Robotnik but, despite her strong feelings for Sonic (and his for her), they decided that their relationship could not work.

Breezie later found work hosting a daytime talk show. She met Sonic again and tried to rekindle their relationship as she still had feelings for him, but Sonic, despite his previous love for her, made it clear he was no longer interested in a relationship. Breezie was soon kidnapped by Scratch and Grounder, who also kidnapped Robotnik Jr., another of Robotnik's creations. The two annoyed each other at first, but they later fell in love.

Breezie and Robotnik Jr. married and made a nice little home together. At Sonic's testimonial dinner, Breezie sat up on stage along with Sonic, Tails and the host, Wes Weasely. Breezie was the first to give her sincere testimonial about Sonic.

In the episode "Blackbot the Pirate", Sonic finds a girl on the beach, whom he refers to as a "Cute little Hedgehog in a polka dot bikini." This Hedgehog woman is almost identical to Breezie, except her fur is gray and her hair is blonde.

Breezie is flirtatious, seductive and a bit spoiled. Beneath the somewhat ditsy exterior of hers though, she was initially nasty, scheming and rotten, luring Sonic to the most dangerous parts of Mobius without a shred of concern for his own well-being while coldly preparing his doom. However, Breezie eventually had a glitch which made her develop a sense of mortality and genuine concern within her for others. She also became guilty for the misdeeds she committed which led to her initial departure from Sonic. Since then, Breezie has become much more friendly towards others, though she still kept some mean traits like openly making fun of Robotnik Jr., which is noted to be similar to the latter.

Because she was designed to be cruel as her wicked creator Doctor Robotnik intended, Breezie was initially foreign to acts of random kindness. She was surprised when Sonic brought her a gift she did not ask him for and was confused over her own capabilities for goodness and feelings of regret.

Breezie was by no means a pushover, which is exhibited in bossy, slightly stubborn and tough behavior. When Scratch and Grounder offered their services, she quickly and strictly asserted herself as their boss and when escaping Robotnik, she preferred getting out on her own instead of with Robotnik Jr.'s help. For a while, Breezie was a typical "damsel in distress", often relying on Sonic to get her out of trouble. However, she eventually outgrew that when she saved Robotnik Jr. on her own, which made her learn that she liked having others relying on her.

Breezie possesses a compartment in her torso which can be accessed by opening a hatch on her stomach. Inside it, she has a robot-com-phone used for communicating with Dr. Robotnik. She also possesses a number of emergency equipment, like a helicopter rotor that she can sprout from her back which grants her flight, though some of them are no longer working. Other equipments can be viewed from inside her torso compartment as well. 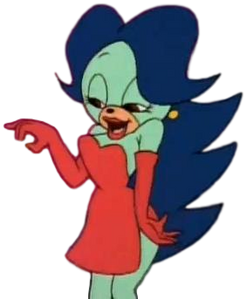 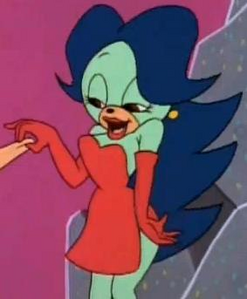 Retrieved from "https://villains.fandom.com/wiki/Breezie_Hedgebot_Robotnik?oldid=3458775"
Community content is available under CC-BY-SA unless otherwise noted.