Play mind games with Natalie by killing anyone associated with her using urban legends (both succeeded).
Kill Natalie, frame Wexler for the murders, and win the heart of Paul (failed).

Brenda Bates is the main antagonist of the 1998 mystery slasher film Urban Legend. After losing her boyfriend in a car crash caused by reckless college girls, Brenda became a serial killer obsessed with urban legends, recreating them while dispatching her victims.

Brenda and her boyfriend, David Evans, were planning to get married after high school graduation. Unable to buy a her a ring, David gave her a necklace. However, that very night, David was killed in a car accident that was caused by two girls pulling a prank on him that was inspired by an urban legend. Both Brenda's heart and her sanity were shattered and she waited for her chance at revenge. She enrolled in the same college as one of the girls, Natalie Simon, and became her best friend. She then murdered Michelle Mancini, the girl who drove the car, by hiding in the back seat of her car and decapitating her with an axe.

After murdering Michelle, Brenda would go on to extend her torment of Natalie, by nearly killing all of her friends while trying to pin the blame on their professor, William Wexler.

Eventually; Brenda, Paul, and Natalie discover Wexler's body in the back of Paul's jeep, and now thinking that Paul's the killer, Brenda and Natalie run away into the forest where Brenda takes the opportunity to get lost and reinforce that Paul was the killer. Natalie, having made it out onto the road, hitches a ride with the Janitor, but a disguised Brenda chases after them in Paul's jeep. In a sense of irony, Brenda starts flashing her headlights, which causes the Janitor to crash. After crawling from the accident, Natalie limps to the nearby abandoned school, hearing Brenda's screams coming from inside. She eventually makes her way to Brenda, finding the corpses of her friends behind doors along the way. Natalie sees Brenda laying still on a bed and thinks she's dead, but when she turns her back, Brenda punches her in the face causing her to black out.

When Natalie comes to, Brenda reveals herself as the Killer and explains her motives for the murders. Planning to make Natalie the last victim by recreating the kidney heist. However, she is interrupted by Officer Reese who holds her at gunpoint. When Reese goes to check her for weapons, Brenda pulls out a switchblade and slashes her in the shoulder. She then grabs her gun and holds Natalie at gun point, only for Paul to interrupt her. He feigns being on her side, trying to get the gun, but she sees through it and before she shoots them, Reese takes out another gun and shoots her in the arm. She drops the gun and Natalie picks it up and shoots her again, sending her falling out a window. Thinking her dead, Natalie and Paul drive to get help, only for her to appear in the backseat of the car with an axe. While trying to kill them, Paul crashes the car into the side of a bridge, sending Brenda through the windshield into the river bellow, to her supposed death.

Sometime later, a group of students are discussing the story of Brenda's murders, when one girl, revealed to be an alive Brenda, tells them that they didn't tell it right, and begins to tell them the real story.

Brenda makes a guest appearance at the end of Urban Legends: Final Cut. Professor Solomon, a teacher at a prestigious film school as well as a serial killer who stole one of his students films and murdered everyone involved based on urban legends to get away with it, was shot and put into a mental hospital. His nurse, revealed to be Brenda, told him that they had a lot in common before wheeling him away in his wheelchair.

While pretending to be Natalie, Damon, Parker, Paul and Sasha's friend, Brenda comes off as shy, resistant and genuinely shocked by the gruesome murders transpiring. In reality, however, she is scheming, taunting, infuriated and vengeful. She is also very jealous and easily upset over men, as when Natalie is seen in the film sharing a kiss with Paul, whom Brenda expressed to Natalie that she liked.

Brenda appears as an athletic college girl. She has light brown curly hair and green eyes. During the murders, she wears a ski mask under a dark parka, giving the illusion that her face is hidden in the darkness of the hood.

The Urban Legend Killer about to kill Michelle.

The Urban Legend Killer about to kill Dean Adams.

The Urban Legend Killer about to kill Sasha.

Brenda revealing herself as the Urban Legend Killer. 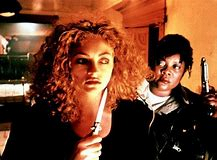 Brenda about to kill Natalie.

Brenda in Urban Legends: Final Cut.
Add a photo to this gallery

Retrieved from "https://villains.fandom.com/wiki/Brenda_Bates?oldid=4302290"
Community content is available under CC-BY-SA unless otherwise noted.