Start his operation in China (failed).

Brendan Conner was an IT billionaire who made his fortune on dark net identity theft. He cut his teeth with phone fraud and never looked back. Through the dark web, Conner stole identities and selling his services as a cyber-criminal to the highest bidder.

ICA information and recent traffic intercepts indicate that he was currently working with high-ranking members of the Chinese government and were plotting conspiracies in the mainland, as the internal power struggles of that labyrinthine organization grind up possible rivals and threats.

Conner was assassinated by Agent 47 in Paris when he was attending the IAGO auction. An anonymous client hired the ICA and 47 to have him eliminated to ensure that his operation would never happen.

Conner takes high-risk jobs that could easily incriminate him, despite already being a billionaire. He also doesn't spend enough time covering his tracks, despite working in a job where secrecy is of utmost importance. He's also extremely hedonistic, paying five grand for an attractive escort instead of a bodyguard and wearing extremely vibrant clothes when he's trying not to draw attention to himself. 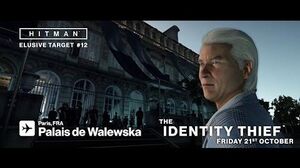 Retrieved from "https://villains.fandom.com/wiki/Brendan_Conner?oldid=4258073"
Community content is available under CC-BY-SA unless otherwise noted.