Hanging out with Louise Jameson.

Brent Ernst, better known as Slappy, is one of the bosses and a minor antagonist in the 2010 video game Dead Rising 2 and its remake Dead Rising 2: Off The Record. He is also an optional boss in the main mode 72 Hours, who you can meet for the first time on the 2nd day at 12 p.m. at Palisades Mall in the Kids' Choice Clothing children clothing store in the side quest "Everyone Knows Slappy". He is a shop mascot who works in the Kids' Choice Clothing store, who, due to the death of his girlfriend Louise Jameson at the hands of zombies, went insane and swore revenge against the person responsible for the outbreak, Chuck Greene.

In Dead Rising 2: Off The Record, Brent's role as the boss is the same as in Dead Rising 2, although Brent's psychosis is even greater because he believes that he and his girlfriend are toys and gets mad when Frank refuses to "fix Susie" .

He was voiced by Brad Swaile.

Shortly before the events of the game, Brent was working as the shop mascot Slappy of the Kids' Choice Clothing chain and became infatuated with his associate Louise Jameson, who was also the shop mascot Susie. Louise loved him with the same love and agreed to go with him on their first date. Brent was overjoyed, but the zombie outbreak thwarted their plans and Louise, who was still wearing her Susie costume, was killed by the zombies, and Brent vowed revenge on the person responsible for her death. At one point, Brent saw on TV that Chuck Greene was responsible for freeing the zombies from their cages in the Arena. So he began searching Fortune City for Chuck.

At 12 p.m. on September 26, Stacey calls Chuck, telling him that she noticed someone wearing a mascot costume in front of a Kids' Choice Clothing store in Palisades Mall, and asks him to check it out because the person does not look very good. Chuck Greene heads to Palisades Mall and heads to the Kids' Choice Clothing Store. She sees dead and bloodied Louise Jameson dressed in a mascot costume outside the shop and walks over to her to inspect the body. Right behind him, Brent dressed in a Slappy costume appears and immediately recognizes Chuck. Chuck asks him who he is to which Brent replies that he is Slappy and that everyone knows him just as everyone knows Chuck because he saw him on TV planting bombs in the Arena to free zombies. Chuck defends himself by telling him he is set being up and the material was forged. Brent does not believe him and it is because of him he lost the most valuable thing he had, which was his girlfriend Louise Jameson. Brent rides up to her body on roller skates and tells Chuck that they were going on a date tonight. Brent goes berserk as he laments Louise's fate and decides to avenge her death by pulling out two flamethrowers to kill Chuck for killing Louise and destroying his life.

After the fight, the defeated Brent falls to the ground and begins to crawl to Louise's corpse. The boy, dying of pain, begins to compliment her appearance by hugging her and tells her that they will soon see each other on the other side and then dies, but suddenly he stands up and screams out loud, Don't worry kids! Slappy will live forever! and eventually dies.

In Dead Rising 2: Off The Record, Brent's role as the boss is the same, but with some differences in the cutscene. As a result of the oubreak and Louise's death, Brent has gone insane to such an extent that he believes that he and Louise are real toys and the dead Louise is simply a broken toy that needs repair. When he meets Frank West at the Palisades Mall he tells him he recognizes him from TV and tells him that Frank is great at fixing things. Brent asks Frank to fix Louise because she got broken and he can't fix her. Frank sees that Brent has gone insane and tries quite nicely to tell Brent that he can't fix Louise. However, Brent believes that Frank is refusing to fix it on the grounds that Frank prefers to take pictures, and then attacks Frank with flamethrowers.

After the fight, the defeated Brent falls to the ground and begins to crawl to Louise's corpse. The boy, dying of pain, begins to compliment her appearance by hugging her and tells her that he has broken down too and soon they will see each other in a big toy box in sky and then he dies, but he suddenly gets up and screams out loud, Don't worry kids! Slappy will live forever! and eventually dies. 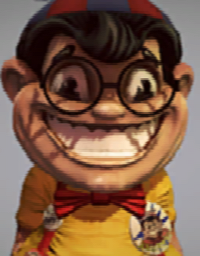 Photo of Brent in Chuck's Notebook. 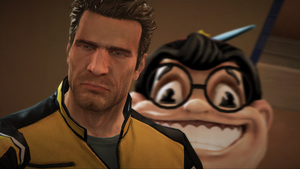 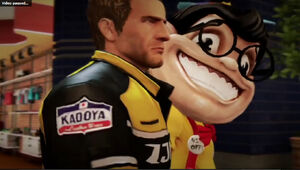 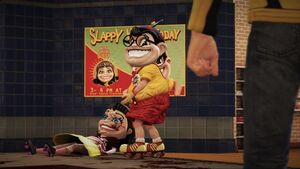 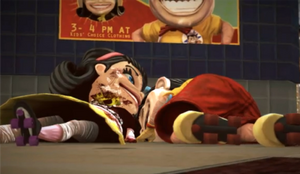 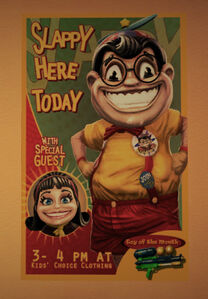 One of the posters with Brent and Louise in Fortune City. 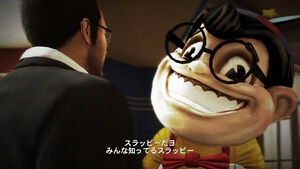 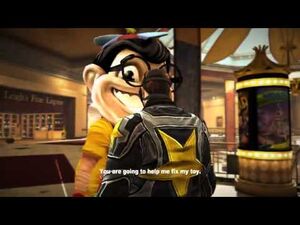 Brent in front of Frank.