Brent Green (also known as The Invisible Boy) is the main antagonist-turned-main protagonist of the Goosebumps novel My Best Friend is Invisible and TV series episode of the same name, and a supporting antagonist of the 2015 Sony Pictures Animation film Goosebumps. He earned his nickname from his invisible state.

In the TV Series he was portrayed by Darcy Weir while in the film he was voiced by Jack Black (who also played Slappy and R.L. Stine).

My Best Friend is Invisible

He is first seen in Sammy Jacobs's bedroom and made a really big cereal mess in it. he told sammy that he didn't want to cause any harm, he wanted to be Sammy's friend. Sammy showed Brent to his parents but they didn't believe him. Sammy showed Brent to Roxanne but she told the whole student body and they mock Sammy during school. Sammy believes that Brent is trying to ruin his life. Brent proves his friendship by making Sammy lose the Relay race. to make it up to Roxanne, Sammy made Brent stay at her place because she had Better Food. Brent refused to live with her because he doesn't like to make friends with girls. Since Brent has ruined Sammy's Race he tries to throw Brent out the bedroom window. He Killed Sammy (he later revived because he is actually an alien) and said that he goofed around in a familiar way. Sammy turns up the heat and makes steam to reveal who Brent really is but he left before the steam could make him visible. Sammy's parents thought that this had gone too far and tried to take Sammy to a Mental Institute. Sammy convinced his parents to get The Flashlight (his dad's Invention to reveal Brent's True Form to them.). After Brent is revealed Sammy and his family reveal that they are actually aliens and tells him that the world that Brent lived in was taken over by aliens. Sammy's dad told them to put Brent in the zoo because humans are "Endangered Species".

Almost the same plot is in the TV series except they have a twist ending. Instead of taking Brent to the zoo, Sammy and his parents surround him in very menacing way and presumably kill him.

Brent was first and only seen in his invisible state. Brent (Voiced By Jack Black) was scaring the main characters in Stine's Car. Brent's handprints were seen on the front window of the car. Stine drove too fast to get him off of the car which made Brent say "Not Cool". Brent was not seen throughout the rest of the movie until the Twist ending which Stine saw him type The Invisible Boy's Revenge on the piece of paper that was left in the Magic Typewriter. Brent said "You Forgot about me" and laughs while leaving his handprints on the case where the typewriter was and the book The Invisible Boy's Revenge's cover was seen during the credits. 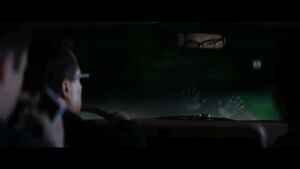 Brent Green in the Goosebumps film.