Brez Arenishka is a deer-themed Gangler Monster and the main antagonist of episode 9 and 10 of 2018 TV series called Kaitou Sentai Lupinranger VS Keisatsu Sentai Patranger. He is also equipped with a battery-like treasure called L’Orage électrique.

He was voiced by Takashi Shigematsu.

Brez Arenishka's head is an orange and yellow robotic deer head, his brown antlers make a circle, his neck is green an it has red leaves both sides, his belly is orange and it has a Gangler safe in it, he has green shoulders that has white antlers on it, his deer hooves has red leaves on it, under the deer hooves there are black hands, he also as green pants and the antlers make the pelvis on the green pants, his feet are orange deer feet and the green and orange legs have red leaves on it, his weapon the Shikaliburs are a pair of white swords shaped like antlers.

Brez Arenishka made his first appearance when he'd attack Ema Goldeen because she has a Scissors & Plane dial fighter that she'd wore like a necklace. As he'd battle Lupin Red he'd sent the Pordermen to get the jewel from Mrs. Goldeen, however both Lupin Blue and Lupin Yellow showed up and kept Brez Arenishka busy while the leader goes after the Pordermen. After the intro Brez was still battling the duo before the police showed up, so he fired the electricity at them, but he'd got the Pordermen by mistake, but he'd got away.

Brez is then at his hideout watching the news about a exhibition of Mrs. Goldeen's jewelry collection and letting Destra Majjo a heads up.

During the exhibition Brez managed to steal the jewelry, but turns out to be a trap so he'd battled the police and the two thieves. The battle was then taken outside and Brez is still firing out the electricity, however before the duo get a chance Patren1gou "destroyed" Brez with the treasure inside.

The real Brez made his second appearance as he was heading towards the factory to meet up Zamigo Delma. However, he was then attacked by the arrival of the police and the thieves. Now during the fight when Lupin Blue was about to use his dial fighter on Brez's safe he'd manage to duplicate himself to prevent that and he was about to due it again, but thanks to Lupin Blue he tied Brez up as Lupin Yellow managed to get into his safe (which his password is 3-8-8) and got L’Orage électrique (which translate as "Electrical Storm") battery in the nick of time before he was actually taken out by the police.

However, thanks to Goche Ru Medou she'd managed to enlarge Brez Arenishka as he would battle Lupin Kaiser equipped with the Scissor & Blade Dial fighter. Both the real and his clones were then destroyed regardless. 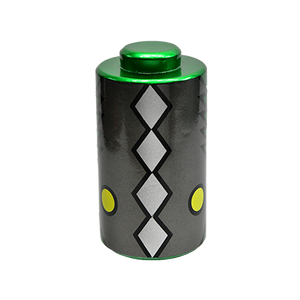