Supervillain
Right-Hand of the One Below All

Serving the One Below All.

Ensure that his "monster gene" is not passed on.

Kill his wife and son.
Destroy the multiverse (all failed).

Brian David Banner was a villain in Marvel Comics associated with the Hulk. He was Bruce Banner'/Hulk's abusive father and his arch-nemesis whose evil legacy lived on longer after his death Such as the Guilt Hulk. He eventually returned as a Hulk-like monster known as Devil Hulk.

Even more recently, Brian Banner has appeared as a supporting antagonist of the Immortal Hulk series, where he possessed Hulk for a period of time and had him open the Green Door, allowing the world to be transported to Hell. It is strongly implied Brian was able to do this via the aid of the One Below All.

As a child, Brian and his mother were physically and emotionally abused by his father. Regarding his father as a monster and believing that he had inherited a "monster gene" from him, Brian promised himself that he would never have any children, for fear of bringing another Banner into the world.

In college, Brian met Rebecca, whom he fell in love with and later married. Gaining a PhD in physics, Brian found a job in Los Alamos working for the government as a member of a project trying to develop a clean way to create nuclear energy. The stress of his job eventually led Brian to become an alcoholic and he began to develop anger problems, lashing out at others. While drunk on the job one day, Brian accidentally overloaded some machinery, causing an explosion that caused him to get fired. Despite doctors stating that the explosion caused him no harm, Brian became convinced that the explosion in Los Alamos had affected him on the genetic level.

Despite his vow to never have children, Brian impregnated Rebecca, who gave birth to Bruce Banner. Instantly hateful of the young Bruce, who he believed to be a monster created from the radiation he was exposed to and the "monster gene", Brian ignored him completely and attempted to keep Rebecca away from him, leaving Bruce in the care of the neglectful Nurse Meachum. When Bruce woke up early one Christmas morning and opened a present from his mother, a complex model, he assembled it easily despite his young age.

Brian's discovery of this convinced him that his belief that Bruce was abnormal and different was correct and resulted in him beating Bruce and Rebecca when she came to their son's aid. Forced to endure heavy abuse from Brian for several years, Rebecca attempted to escape him with Bruce. Finding Rebecca as she and Bruce were packing their belongings into a car, Brian attacked Rebecca, killing her by smashing her head against the pavement in front of Bruce. Under the threat of severe punishment, Brian managed to stop Bruce from testifying against him at his trial for Rebecca's murder, saying that if he did so, he would go to Hell.

Intimidated by Brian, Bruce lied to the courts, stating that his father never abused him or Rebecca, who he said tried to run away for no reason. Brian escaped conviction due to lack of evidence, but was later arrested when, after becoming drunk, he boasted about how he beat the law by bullying his son. Taken away, kicking and screaming, Brian yelled at the young Bruce that he would get him for this. Brian was imprisoned and put in a mental institution.

After fifteen years of confinement, the doctors believed that Brian was ready to rejoin society. Bruce talked to the doctors but they felt he was cured now. Bruce reluctantly let his father stay with him for a short amount of time and noticed he was acting strange. Bruce admitted freely that he thought his father was still disturbed. Brian broke down and blurbed out the fact that his father, Bruce's grandfather had abused him too but it was obvious Brian Banner was up to something. Brian was acting stranger and stranger and Bruce said he should maybe check himself back in for more therapy. Brian broke down and shouted that maybe he had gotten better in the mental hospital because he was away from Bruce. Bruce called him mad and walked away.

Bruce went to his mother's grave because it was the anniversary of her death. Brian followed him there and started harassing him again about how Bruce was an evil monster and how he was just trying to save mankind from a mutant and monster like Bruce. He told Bruce he will tell the world what kind of person he was. They argued further which led to a physical confrontation. Bruce was on the ground and Brian was about to jump on him when Bruce pushed him back with his foot. Brian stumbled back and cracked his neck on Rebecca's gravestone. Bruce blocked the memories of Brian's stay with him and his subsequent death, making himself believe that, as the two of them fought at Rebecca's grave, Brian had simply beat him and left, later being killed by muggers.

Brian's ghost continued to haunt Bruce's alter-ego, the Hulk, after his death, often appearing to taunt him, stating that he was no better than him. Villains such as Mentallo, the Red Skull, Devil Hulk and Guilt Hulk also used the image of Brian Banner against the Hulk, in an attempt to weaken him.

When Bruce Banner and the Hulk were fused back together after being separated on Counter-Earth, Bruce found himself in Hell, where he met Brian. At first terrorized by Brian, the Leader and the Maestro, Bruce eventually stood up to his father, brutally beating and strangling him before being returned to Earth by the spirit of his deceased wife, Betty Ross. Having faced his father, Bruce's haunting by him ceased.

When the Hulk began to suffer from Lou Gehrig's disease, Mr. Fantastic, in order to cure him, had Brian Banner's grave dug up and his corpse exhumed, so as to collect some of his DNA. With this, Mr. Fantastic managed to successfully cure the Hulk. After this incident, Bruce Banner visited his father's grave and lamented to himself that now he didn't know how to feel about him.

The mutant hero Trauma, who had the power to change into an opponents worst fear, adopted the guise of Brian Banner to use against the Hulk. Unfazed by Trauma's transformation into Brian and other enemies of his, the Hulk beat him while stating he was afraid of nothing.

Brian returns in the Chaos War arc when the Chaos King resurrected him, and gives him the ability to transform into a monster mixed with Devil and Guilt Hulks. Hulk stands no chance against Brian in that state, even his allies. That it, until it is revealed that hate is what makes him stronger. Jarella defeats Brian by using the Hulk's love for her.

Brian Banner takes a major antagonistic role in the Immortal Hulk series and helps bring about the arrival of the One Below All, who he had made contact with many years previous and who had drove him insane, making him obsessed with a "monster gene" and seeing his son as the one who would carry it. Ironically, it was Brian's relentless abuse of his son that caused him to develop the destructive alter-ego of Hulk, which would surface many years later due to gamma-mutation: apparently all this was part of the One Below All's bigger plan.Brian would soon return where he is asorbed by Leader to take his place. 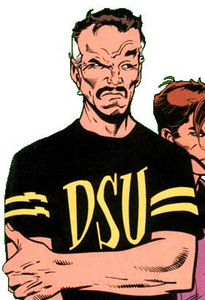 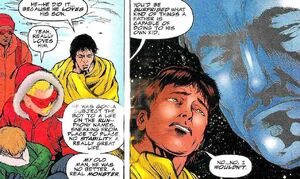 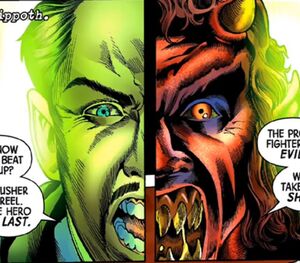 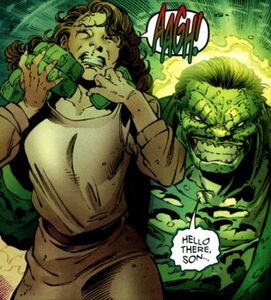 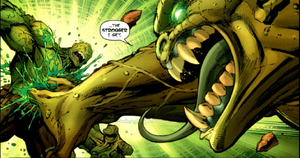 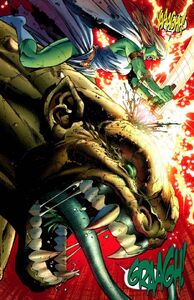 Brian/Devil Hulk being stabbed in the head. 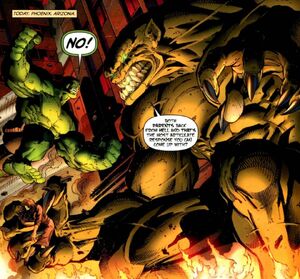 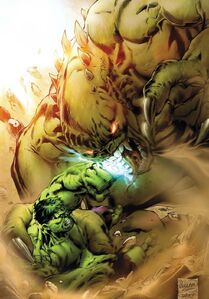