Brian H. Griffin (born 1991), or best known as Brian Griffin, is the tritagonist of Family Guy and the deuteragonist of Road to.... He is the Griffin family's pet dog and Peter Griffin and Stewie Griffin's best friend. He starts as good yet slightly bitter dog before envolving into one of the most hated characters of the series since season 12.

Initially, Brian is a comparatively more grounded and reasonable character, acting as a decent foil towards Peter. However, as with many characters, Brian has started to show more of an atrocious side as the series progresses into more of a dark humor series. He became very egotistical and severely egomaniacal (this may be because of his bad behavior, which he continuously blames on somebody else rather than himself, showing him to be a narcissist) and being very obsessed with his failed book Faster Than the Speed of Love and then his bestseller Wish It, Want It, Do It), inadvertently turning even more into Lois' father Carter in later seasons. This leads to him often treating his fellow family members poorly and committing various crimes.

However, some of his old personality almost remains and still acting sometimes empathetic on the Griffin family, mainly Stewie for protection reasons. He and Stewie are the most intelligent of all of the members of the Griffin family. However, because of his ego and sometimes being as reckless as Peter, Brian is less intelligent than he makes himself at to be.

While he is not seen holding a regular job in Quahog, Brian is depicted owning a 2004 Toyota Prius, paying bills, and maintaining a credit card. In an episode he has been a substitute teacher at Chris' school, a contributor for The New Yorker, a taxi driver and a drug-sniffing dog for the Quahog police department. He also worked selling cars while the Griffin family thought that Peter had died in the episode "Perfect Castaways." Brian held several jobs while living in Los Angeles including waiter, car wash attendant, screenwriter and pornographic film director. 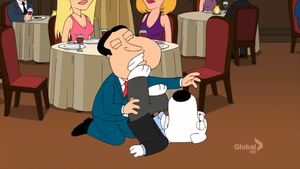 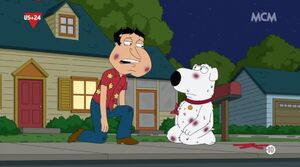 A rare moment of peace between Brian and Quagmire.
Add a photo to this gallery 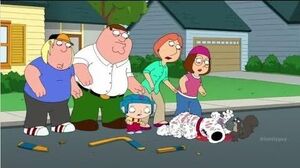 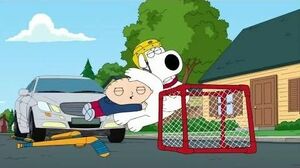 Retrieved from "https://villains.fandom.com/wiki/Brian_Griffin?oldid=3842558"
Community content is available under CC-BY-SA unless otherwise noted.