Kill anyone who attempts to escape Raccoon City.

Brian Irons is a chief of Raccoon City Police Department, but he is corrupt. It turns out that Irons is bribed by Umbrella, mostly by William Birkin, into keeping the company's secrets and allowing them to conduct experiments on living subjects, making him partly responsible for the T-Virus infecting Raccoon City. It is also heavily implied that he was a serial killer before the Raccoon City outbreak by the human skulls that are in his secret room in the police precinct.

Claire first encounters him in the police headquarters with the Mayor's daughter. Though at first he appears to be a benevolent police chief, it later turns out that he's been using the zombie outbreak to his advantage by doing whatever he wants without fear of repercussions, going as far as killing his fellow police officers as well as the mayor's daughter who he was supposed to protect, planning to keep her body as a trophy for himself. Later, she is held into gunpoint by Irons as it is revealed he worked for Umbrella and looking for his briber's daughter, Sherry. Suddenly, the embryo that Birkin injected him earlier on bursts out of his body, killing him.

In an alternate path, his fate is largely similar in that he corners Claire. However, he is instead killed by Birkin directly, being dragged down into a manhole and then having him being ripped in half from the waist down, with his top half being thrown back to the top just as Claire was about to investigate.

Irons appears in a cut scene where he attempts to stuff the Mayor's daughter's cadaver (it is heavily implied that he murdered her by this time). Suddenly, he is confronted by Claire and Leon, whom the latter knows who he is because he works for him. Irons sees Sherry as he is searching for her. Just then, he is killed when a monster comes out of his body.

Irons appears in a parking lot, encountering Claire and Sherry holding them at gunpoint. He tells Sherry to tie Claire's hands and takes her with him or he will shoot Claire. He closes the parking lot's gates before Claire could catch up to him after freeing herself from her binds. Later, Irons locks Sherry in a bedroom in a orphanage and calls Claire and demands her to meet him and bring Sherry's pendant she dropped in the parking lot.

When Sherry takes Irons' keys and attempts to escape from him, he catches her, but retaliated, she throws a jar of acid, burning his face and giving him a burn-up scar. He locks the door to prevent Sherry from as he antagonizes her as while she tries to escape. While searching her Sherry, goes to the bathroom to clean his face, not knowing Sherry takes his keys which he left them on the bathroom door's lock. However, he notices Sherry fleeing with the keys she stole and unlocks the door to downstairs. Sherry uses the keys to unlock every door in the orphanage to get outside, but all were chained on the other side, forcing her to hide in Irons' room. Irons finds Sherry, but Birkin implants a G embryo into into his mouth. Later, Claire arrives at the orphanage, she is encounters Irons once again, who tells her it was all her fault that she took so long, before being killed instantly by the embryo that bursts out his chest. 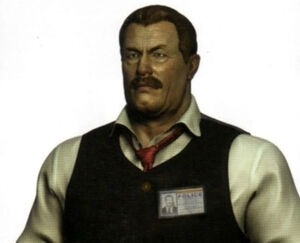 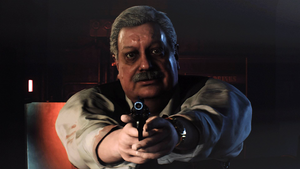 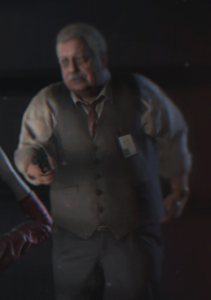 Irons in the remake, kidnapping Sherry. 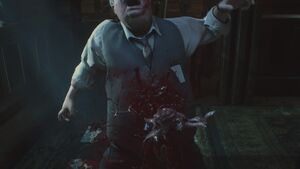 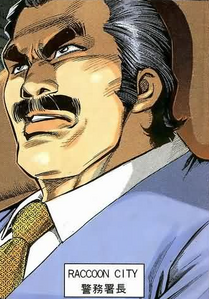 Irons in the King's Foundation manhua. 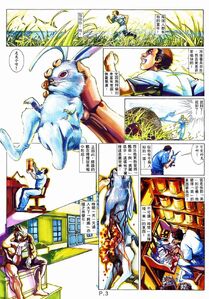