Tempting others into traps.

To drown anyone or anything they come across.

Briar and Bramble are a pair of villainous characters from the 2017 DuckTales series, appearing as the main antagonists in the episode "The Missing Links of Moorshire" : they are based on the legend of Kelpies, a type of Scottish water-demon often taking the form of a horse to drown innocents, much as in the original legends they are envisioned as ponies but have colorful manes and pelt (unlike the legendary Kelpies) and are voiced by Tara Strong and Andrea Libman (both famous for their work in My Little Pony: Friendship is Magic) - thus they are parody of both Scottish legend and the MLP subculture.

Briar and Bramble are a pair of Kelpies, magical creatures similar to fairies but with more malicious natures, they take on the form of rather innocent ponies but are not very skilled at guiding their intent to kill the protagonists, being referred to as "murder ponies" - they continually try to tempt the group into riding their backs in order to drown them but due to their blatantly murderous nature the group opt instead to wander off without them, making the Kelpie pair rejected and commenting on how the ducks were "the least fun victims ever".

This does not stop the pair from following the group and trying time and time again to drown them with varied tricks, all of which fail, even at the end when the group complete the gold course the pair try one last trick, offering a "victory swim" - only to get a resounding "NO!" from everyone else.

Briar and Bramble appear as a pair of female ponies, much as Kelpies do in folklore, they are more humanized than they are in the legends, however, with the ability to speak and brightly colored manes and coats : this is a parody of how "ponies" in modern culture are associated heavily with Hasbro's My Little Pony franchise.

They also wear small hats, which signify their links to Scotland (as Kelpies are a traditional water-demon from Scottish folklore) as well their links to what amounts to a magical gold-course (since such hats are often associated with golf). 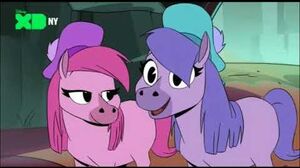 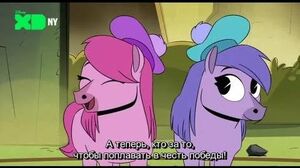