Daniel "Danny" Brickwell, better known as Brick, is a villain in the DC Comics universe. He is a major enemy of the Green Arrow.

After the events of Green Arrow: City Walls, there was a massive power vacuum in Star City's underworld, as many gangsters and policemen alike had been killed in a battle against demonic invaders from another world. Where others saw chaos, Danny "Brick" Brickwell saw opportunity.

Brick was originally a low level henchman/enforcer for various mobsters in Star City and also ran his own street gang. However, he had a brilliant criminal mind and higher aspirations to go with it. In the wake of the demonic attack against Star City, he began to expand his gang's criminal activities, particularly drug sales, into areas left vacant by other criminal organizations.

He even succeeded in uniting the various street gangs of Star City under his leadership. These low level criminals were previously denied access to many lucrative areas by more "up-market" mafioso, but once united under the leadership of Brick they became an overnight crime syndicate with greater manpower and resources than the now greatly weakened traditional organized crime families.

As his criminal empire grew, he came to the attention of Star City's Police Department, Green Arrow, and the council of mafia/gang leaders who represented the various criminal families of Star City. Brick was invited to a meeting of this council and told that his new criminal enterprise would be allowed to continue in Star City, but only if the Mafia were given a cut; his alternative was death. Brick had the entire restaurant leveled with a rocket launcher while he was still inside it. He was the only thing left standing.

Next, he killed Star City's Mayor and District Attorney, using a suicide bomber. When he was arrested, he went calmly and revealed that he had kidnapped the new mayor's infant daughter (having bribed her security detail) and would kill her if he was not released immediately. Green Arrow was brought in to search for the child, but was unable to find her; Brick engineered his capture and release from custody to show the public that he was "above the law."

Though unable to take Brick into custody, Green Arrow challenged Brick to a duel over who owns Star City. He shot a glue arrow into Brick's mouth, blocking his throat and suffocating him. Rather than allowing him to die, Green Arrow saved Brick, warning him that should he step too far out of line, next time he will die. Since this incident, his interference with law enforcement and the political figures of Star City has either ceased or vastly subsided.

Brick was responsible for hiring Deathstroke to blow up Green Arrow's first house.

After Doctor Light and Merlyn blew up most of Star City, Brick started fighting the crime that grew in the ruins of the ravaged city and the mutations that appeared in the "Glades". However, it is later asserted that he is still a source of illegal activity in the Glades and that he is only fighting the street crime because it's bad for his business. He teamed up with the Red Hood at one point to fight both Green Arrow and Batman.

Brick was later killed by Cupid, who blew up his office with a gigantic wrecking ball, literally blowing him apart.

In some unknown way, Brick was able to survive the wrecking ball and is seen in San Francisco, trying to kidnap the daughter of a millionaire, who was actually Miss Martian in disguise. Brick was quickly defeated by it.

In this new timeline, Brick is reintroduced as one of Richard Dragon's group called the Longbow Hunters, whose aim is to kill Green Arrow and claim a $30 million bounty Dragon put out on him.

Brick appears in Young Justice voiced by Khary Payton. In the beginning of the episode "Welcome to Happy Harbor", Brick's gun smuggling operation in the docks is thwarted by Speedy. He and his gang attack the hero, but are later defeated by him and the group (Robin, Kid Flash, and Aqualad). In "Terrors," Brick was seen as an inmate at Belle Reve. He was part of Icicle Sr.'s plan to escape from Belle Reve. The breakout was interrupted by Superboy who defeated him and Blockbuster. In "Coldhearted," Brick was seen in Belle Reve's cafeteria serving cafeteria food to Count Vertigo, mocking him along with other prisoners.

Brick is introduced in Season 3 of Arrow as a supporting antagonist, a minor antagonist in Season 4 and will return in Season 7. This iteration of Brick is a mobster who aimed to take control of the Glades.

He is portrayed by Vinnie Jones. 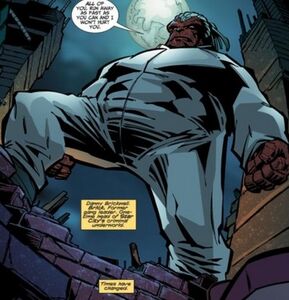 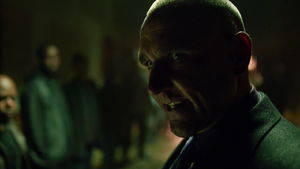