The Old Man From Scene 24

Guardian of the Bridge of Death

Guard the Bridge of Death.

The Bridge Keeper, also known as the Old Man From Scene 24, is a major antagonist in the 1975 cult classic British comedy film Monty Python and the Holy Grail. He watches over the Bridge of Death, which spans the Gorge of Eternal Peril. He asks anyone who wishes to cross three questions. If they get one wrong or don't know the answer, they are magically hurled into the Gorge of Eternal Peril, falling to their death.

He was portrayed by Terry Gilliam, who also played The Animator.

The Bridge Keeper first appears in Scene 24 as a mad soothsayer. He gives King Arthur cryptic hints about an enchanter, a cave and the Bridge of Death, which will apparently lead King Arthur to the Holy Grail. After this, he seemingly teleports Arthur and Bedevere to the forest where the Knights Who Say Ni reside.

King Arthur and his knights encounter him again when reaching the Bridge of Death. Arthur instructs his knights about the Bridge Keeper, after which Lancelot approaches the old man. The Bridge Keeper, knowing that Arthur and the other knights are behind Lancelot asks him the three questions, which simply require him to tell his name, quest, and favorite color, the latter to Lure Arthur and the other knights into a false sense of security. After Lancelot crosses the bridge, Sir Robin volunteers to go next, exclaiming this will be easy. In a cruel twist, the third question is about the capital of Assyria, rather than his favorite color. Robin says he doesn't know that and is hurled into the Gorge of Eternal Peril. Next up is Sir Galahad, who while receiving the simple set of questions regarding his name, quest, and favorite color, instinctively answers the last question the same as Lancelot rather than his own favorite color, also hurling him into the gorge. Finally, it's Arthur's turn, and as his final question, King Arthur is asked what the air-speed velocity of an unladen swallow is. Arthur asks the Bridge Keeper to specify whether he's referring to an African or a European swallow. The Bridge Keeper exclaims he doesn't know, which apparently counts, hurling the old man into the depths of the Gorge of Eternal Peril himself. This allows King Arthur and Bedevere to cross the Bridge in safety.

At Scene 24, the Bridgekeeper appears to be very mad and unhinged, as he treats King Arthur to a very incoherent monologue about the location of the grail. However, this seems to be an act, as he acts much more focused at the Bridge of Death. During his stint as Bridgekeeper, he displays some degree of sadism, as he gleefully tricks Sir Robin with an overly difficult question. 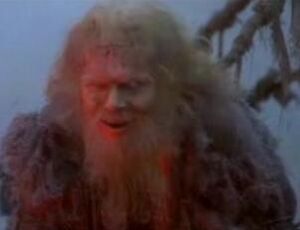 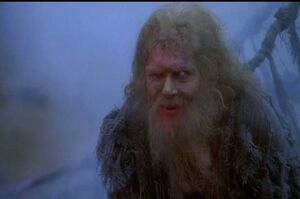 The Bridge Keeper's evil stare as he prepares to ask the questions. 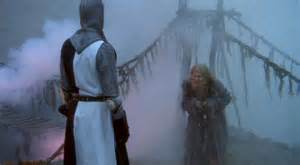 The Bridge Keeper before Sir Lancelot the Brave of Camelot. 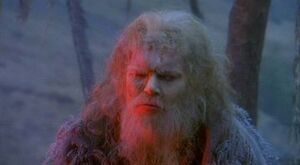 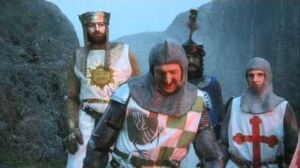