Take over the Divas Division and bully as many Divas as possible.

Arrogant Wrestler
Brie Bella is an former WWE Diva, a former WWE Divas Champion, and a cast member on Total Divas. She is one half of The Bella Twins with her sister, Nikki Bella, and she is best known for her stint as a villainess.

Brie's run as a villainess began in January of 2011, when she and her sister, Nikki, both turned heel and attacked Gail Kim after catching her with Daniel Bryan, who they were both trying to seduce. Brie would feud with not only Gail, but with Eve Torres as well--en route to capturing her first Divas Championship on April 11, 2011. Brie lost the title to Kelly Kelly a couple of months later on Raw, and she and Nikki would feud with both Kelly and Eve, as well as Alicia Fox throughout the remainder of the year and entering 2012.

In the weeks heading into WrestleMania 28, Brie was outed by Nikki as a supporter for then-Raw General Manager John Laurinaitis, and she was in the corner of Team Johnny as they defeated Team Teddy at the event. Brie and Nikki were "fired" by Executive Administrator Eve Torres on April 30, 2012, after both sisters were defeated by Layla El in a Triple Threat Match for the Divas Championship.

Brie returned to WWE along with Nikki on March 11, 2013, and continued her run as a villainess by feuding with The Funkadactyls (Naomi and Cameron). In the weeks leading up to SummerSlam, the evil Brie engaged in a feud with another fellow Total Divas cast member in Natalya, in which Brie, Nikki, and newcomer Eva Marie would spend weeks bullying her. Brie was defeated by Natalya in a grudge match at the PPV on August 18. Brie's run as a villainess ended when all of the Total Divas came together against AJ Lee after she trashed the entire cast in a promo on Raw.

Brie engaged in a heated feud with Nikki after SummerSlam, which saw Nikki turn heel and attack Brie to allow Stephanie McMahon to defeat her. After being forced to become Nikki's personal assistant, Brie helped Nikki win the Divas Championship from AJ when she kissed her after the match began. As a result, Brie became a villainess again and reunited with her sister. After her heel turn, Brie would constantly assist Nikki in winning her matches, while both twins continued to bully AJ and Paige. The twins were defeated by AJ and Paige at WrestleMania XXXI, and two weeks later, the Bellas became babyfaces due to Naomi's villainous turn.

Shortly after, Nikki went on a hiatus from television due to a neck injury which would require surgery, but returned for one night on December 21, to accept the Slammy Award for Diva of the Year. During this time, Brie continued to compete in singles competition, and in tag team matches with Fox.

On April 6 2016, Brie has officially retired from in-ring competition but still signed as an ambassador for WWE.

In March 2017, Brie (then seven months pregnant) and Nikki appeared with YouTube sensation Lilly Singh in a skit where Nikki was looking for "the next Bella Twin" to fill in for Brie, who thought the concept was ridiculous. In the video, Lilly auditioned under various personas (which included copycats of The Undertaker as well as Brie's husband, Daniel Bryan) before auditioning as "Lilly Bella." Brie established her heel persona when she objected Lilly's catchphrase, "Lilly Mode," which is a direct copy of Brie's catchphrase, "Brie Mode." Following Lilly's audition, the evil Brie mocked Lilly's choice of catchphrase; reminding her that "there's only one Brie Bella" before shoving Lilly with her baby bump.

As a villainess, Brie was very arrogant and she constantly bullied the other Divas, as did her sister. 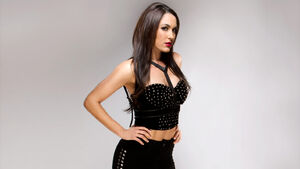 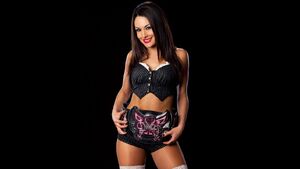 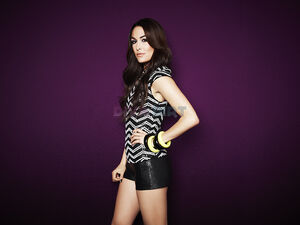 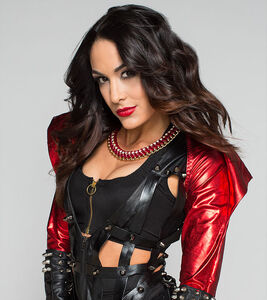 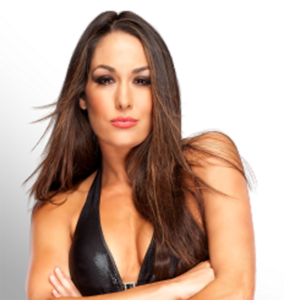 shedding her Nikki Bella disguise at Money in the Bank 2015. 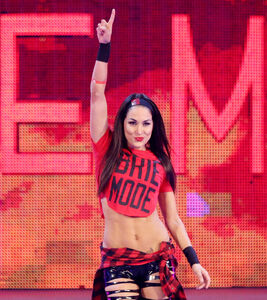 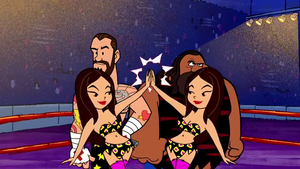 The Bella Twins as The Boulder Twins in The Flintstones & WWE: Stone Age SmackDown!. 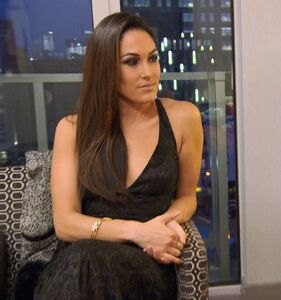 "There's only one Brie Bella...bitch!" 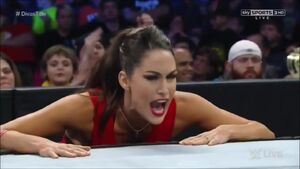