Kill those whom he saw as threats.

Kill his parents for trying to kill him (all succeeded).
Conquer the world and kill anyone who stand in his way (ongoing).

Brandon Breyer, otherwise better known as Brightburn, is the titular protagonist villain of the 2019 super villain horror film of the same name.

In a reversal of the typical Superman story, Brandon is an extraterrestrial who is sent to Earth with the sinister intentions of taking it over. He ends up crash landing in Brightburn, Kansas, where he is adopted by a couple unable to have children.

He was portrayed by Jackson A. Dunn in his first villainous role.

The alien baby that would become Brightburn arrived on Earth within a meteor that crash-landed near the home of a couple named Tori and Kyle Breyer in 2006. As the farm couple cannot conceive a child, they adopted the child as one of their own and named him Brandon, oblivious to the alien's dark nature. They also salvaged the remains of the meteor around that time, which turned out to be an alien ship.

As Brandon got older, he started to develop his abilities such as realizing he had superhuman strength. After attempting to return to the ship he arrived in, Brandon's mannerisms start to darken, making his adoptive parents conclude that something was wrong with him.

Tori later finds drawings that depict disturbing imagery. As he got older, Brandon developed a crush on one of his classmates named Caitlyn and he goes to her house and stalks her. Upon discovering that their chickens had been massacred and implicating Brandon as being responsible for it, Brandon began to be ostracized by his fellow classmates for being a creepy stalker. In a trust exercise, Caitlyn initially refuses to catch Brandon on the grounds of seeing him as a disturbed pervert. This culminates in him breaking her hand and he is then suspended for two days. Once more, Brandon tries to return to his spaceship and repeats the words "take the world" in his extraterrestrial language. It's implied that Brandon was sent by an imperialistic and evil alien race (his species) that destroys planets and eradicates peaceful races.

Brandon goes to see Caitlyn again only to realize that he was denied the opportunity by her mother. Angered, Brandon murders her mother at a diner. After her attempts at counseling her nephew failed, Merilee threatens to call the police to handle the situation only to be on the receiving end of these threats by Brandon. Her husband Noah later tries to inform his parents only to be gruesomely murdered in his car by the alien boy. Realizing what he had done, Kyle takes his adoptive son into the woods and shoots him in the back of the head. Unfortunately, Brandon is revealed to be immune to bullets, and he kills his adoptive father with his laser vision. Tori finds multiple drawings of the murders Brandon had committed and calls the police. When the police arrive, they are brutally murdered by the villain.

Tori manages to get to the spaceship, and she takes part of it to act as a shiv rationalizing that it must be her son's weakness. Embracing her son, Brandon picks up on what she attempted to do with a scrap of metal, and he takes her high into the Earth's atmosphere and drops her to her death. He also causes a plane wreck as a means of covering up his crimes. There were no survivors. This concludes with Brandon going on a murderous campaign and slaughtering numerous people worldwide and leveling cities. He was last seen alongside his dead parents looking innocent.

When he was a child, Brandon, despite being socially awkward, was a prodigious, quiet and nice boy. However, when he discovered his super abilities, his personality took a dramatic turn. He began to develop slowly a god complex, thinking himself superior to humans being and showing delusional tendencies, claiming he wants to do good with his acts. This is because he thinks humans are evil by nature. Brandon developed a crush on a classmate named Caitlyn but the fact he stalked her, so far he entered her room during a night, shows it is just perversion. Brandon also is extremely vengeful, shown when he broke Caitlyn's arm when she refused to help him in school because she knew he stalked her or murdering her mother for not wanting Brandon to have contact with Caitlyn. At the end, Brandon has become a sociopathic madman, lacking empathy, faking emotions when it suits him and with an absence of remorse.

Despite all of this, it is implied that Brandon' descent into villainy was partially influenced by his alien genetics. Also, the moment when he discovered the alien's ship, he walked to the farm like a somnambule and screamed in loud voice with eyes closed that he must take over this world, which strongly implies he was brainwashed by the ship. However, it is debatable if he was completely brainwashed or if he was just influenced by the message and decided willingly to become evil. He also truly cared about his parents, hiding his true nature in their presence and acting normally with them and attacked them only because they tried to kill him in the first place, albeit because at this point, they know Brandon was too dangerous to be left alive.

Brandon is an incredibly powerful alien entity (who goes by Brightburn), with a multitude of potent, unstoppable and extremely lethal superhuman/supernatural powers and abilities: 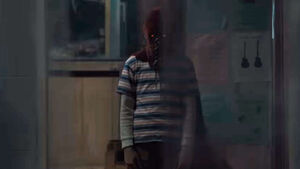 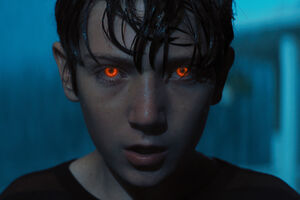 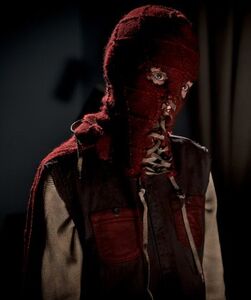 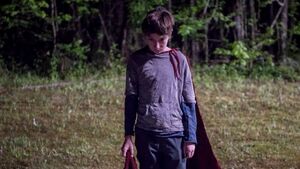 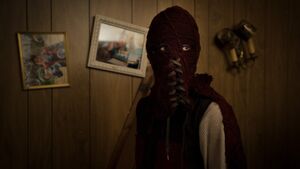 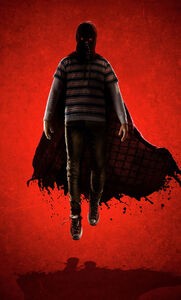 Retrieved from "https://villains.fandom.com/wiki/Brightburn?oldid=4385982"
Community content is available under CC-BY-SA unless otherwise noted.