Villains Wiki
Register
Don't have an account?
Sign In
Advertisement
in: Families, Monarchs, Evil Vs. Evil,
and 28 more

Expand and grow Britannia's borders and territory.
Conquer all foreign nations and leave Britannia as the sole superpower of the world.

The Britannian Imperial Family is the ruling class of Britannia and are central antagonists in the anime/manga series Code Geass: Lelouch of the Rebellion. They are the main rulers and royal family that governs the Holy Britannian Empire holding all dominate positions in both government and military affairs. Much like the country they rule, the entire ruling family are descendents from Sir Ricardo von Britannia and his lover, Queen Elizabeth III.

Each member of the royal family is ranked by both birth order and inheritance and the rank is separated per gender such as the first prince and first princess. Throughout the series, the Britannian Imperial Family rules Britannia, the premier power of the world, with an iron fist and endlessly wages war on all foreign nations to expand and conquer them to cement the dominance of Britannia and are the primary targets for the show's protagonist, Lelouch vi Britannia, who's ironically a member of the family, in his personal vendetta against them.

However, not all the members are evil, and a few try to make the world a better place for everyone. Sadly, they are often overlooked or seen as weak.

The Britannian Imperial Family dates back to pre-revolution Europe where the future members of the family were descended from Sir Ricardo von Britannia and Queen Elizabeth I of the British Empire. Back in the days of the old empire and of the old European aristocracy, the royal family was that of the British Royal Family and played a major role in European and world affairs. Following the outbreak of revolution in the eighteenth and nineteenth centuries however, the old monarchies had fallen and so did the British one. After escaping the British Isles, the royal family and the remnants of the British Empire fled to their North American colonies and established the Holy Britannian Empire while also becoming its ruling class while their original homeland fell and was annexed into the newly formed Europia United.

Sometime following Britannia's formation and expansion, things turned worse for the ruling family. Sometime during the 1960s a.t.b., rival factions of the royal family were formed and began fighting with one another with the sole intent of seeing who would eventually survive long enough to become the next emperor and ascend to the Britannian imperial throne. One such victim was a young Charles zi Britannia along with his brother V.V. who stayed close with one another throughout the dark years. Eventually however, Charles came out on top and became the 98th emperor sometime in the 1990s. In the tear 2008 a.t.b. following the assassination of Marianne vi Britannia, her son Lelouch expressed anger at his father Charles for not trying to protect her and in response, he and Nunnally were disowned and sent to Japan as political hostages and were taken in by the Japanese Prime Minister and his family.

Throughout the 21st Century, the empire of Britannia stood as one of the dominant ruling superpowers in the world rivaled only by the Chinese Federation and the Europia United making the royal family some of the most powerful people in the entire world. The far-east island nation of Japan however, infuriated the royals as the nation controlled seventy-percent of the world's supply of sakuradite, a rich natural resource used for modern military technology and was used as a tool by Japan to maintain a balance of power between the three empires. In 2010 a.t.b. after intense negotiations and political tensions, Charles zi Britannia ordered the immediate invasion of Japan by Britannia and within a month, they won and annexed the island nation and re-named it Area 11. The key tool to this victory was the Knightmare Frame, a humanoid autonomous war machine that decimated the Japanese military and conquered the nation within a month. Lelouch and Nunnally fled into hiding after the war ended and sought refuge with the Ashford Family in Area 11.

Seven years after the invasion of Japan in 2017 a.t.b., the island colony of Area 11 was now a dominion of the empire and ruled by the royal family. The new head of state was the viceroy and the one shown first is Clovis la Britannia, the Third Prince of Britannia, who ruled Area 11 as its Viceroy for sometime now and maintained Britannian control over the colony nation. After a terrorist attack had occurred at the hands of an unnamed Japanese resistance cell, Clovis had a "heartbreaking" speech to the colonial people but, it was all an act as he was at a party with Britannian noblemen and boasted about how he nailed the act perfectly seconds after the broadcast had ended. He was eventually informed by Britannian General Bartley Asprius that C.C. was stolen by Japanese rebels confusing it for a chemical weapon and Clovis sent in his Royal Guard and the army to take it back.

Clovis then went to the Shinjuku Ghetto where the rebels were at and ordered the ghetto's destruction to hide up his tracks and eliminate any potential witnesses and claimed that it was urban renewal to the homeland to retain his claim to the throne. A fight soon broke out as the rebels staged a minor resistance but were being beaten until Lelouch came in and managed to supply them with Sutherlands and turn the battle in their favor until, the Lancelot came in and wiped them all out. During the chaos, Lelouch snuck into the Britannian forces and made it into the G-1 Base where Clovis was and held him at gunpoint.

Using his Geass. Lelouch forced Clovis to admit that he didn't know who killed his mother Marianne and that Cornelia and Schneizel would know. After that, Clovis was shot and killed by Lelouch beginning his campaign against Britannia. 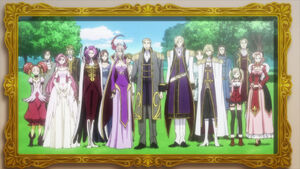 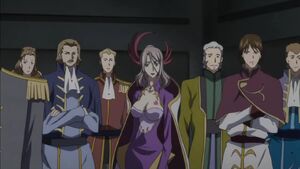