Serve and protect members of the Britannian Imperial Family.

The Britannian Royal Guards are armed forces whose duties are to serve and protect members of the Britannian Imperial Family. There also appears to be a branch in the Royal Guard in the Knightmare Corps. under Monica Kruszewski's command.

Following his rise to power as the 99th Emperor of the Holy Britannian Empire, Lelouch vi Britannia used the power of Geass to force many Royal Guards himself, swearing absolute loyalty to him. Even to the point of sacrificing their own lives to save Emperor Lelouch. They wore grey and white uniforms.

Second Prince Schneizel's Royal Guards, who were under the leadership of Kanon Maldini, protected their Prince and carrying out his orders. They wore green suits.

Second Princess Cornelia's Royal Guards fought alongside her such as the Glaston Knights which was led by General Andreas Darlton and later Gilbert G.P. Guilford. Her Royal Guards wore maroon suits and piloted Gloucester Knightmare Frames. They are greatly feared by their enemies such as Zero and were extremely loyal to their Princess.

Emperor Charles zi Britannia's Royal Guards are only seen in the palace, serving their Emperor directly. They wore grey uniforms with red sashes and short black capes and carried rifles with elaborate bayonets. Jeremiah Gottwald was a member of the Imperial Guard but without a helmet and Cornelia was also one of them as their commander.

Third Prince Clovis's Royal Guards accompanied him to the Shinjuku Ghetto in Area 11 to try to recover C.C. after she was captured by the Japanese Resistance. Standard Infantry were shown to wear brownish and reddish suits while Officers wear that as well as flat caps and a short shoulder cape to show their high rank. 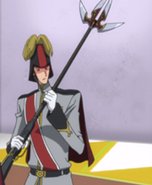 Jeremiah Gottwald as an Imperial Guard

Monica Kruszewski the leader of the Emperor's Royal Guard

General Andreas Darlton the first leader of the Glaston Knights

Gilbert G.P. Guilford the leader of the Glaston Knights after Darlton's death

Retrieved from "https://villains.fandom.com/wiki/Britannian_Royal_Guard?oldid=3810003"
Community content is available under CC-BY-SA unless otherwise noted.