It was voiced by Mark Hamill, who also voiced The Joker.

It originates in a film about a possessed taxi that kills members of a street gang that murdered the driver, though it then spans out to murdering and even eating other innocent people, as well, by pulling them through its front grill and spitting out their bones through its tailpipe.

Rigby, who is scared by the movie, imagines himself being frequently attacked by the taxi, even growing paranoid that it is coming after him due to threatening calls and, in one case, a fax that he gets, believing them all to be from the taxi. It all leads up to a terrifying ordeal one evening in the forest, when Pops's taxi breaks down. Rigby believes even more that the taxi is coming after him and bolts from the taxi, with Mordecai calling after him, disbelieving that the evil taxi could be real.

This, however, ends when, in the distance, Mordecai and Pops spot a car coming their way that they initially think will contain a driver who will be able to help them. However, both are in as much shock and fear as Rigby as they see that it is, in fact, the evil taxi heading their way, and they, too, run as the taxi gives chase to them and Rigby. Eventually, Mordecai keeps the taxi from running down Pops, but they realize that Rigby is its target, after all, and run on to help him.

Rigby, meanwhile, finds himself cornered by the taxi in a clearing, fearfully trapped with no escape. But just then, he conquers his fear by beating up the taxi and smashing it into pieces. It is revealed that the taxi chasing him is actually the employee from The Movie Shack Hut sent to track down Mordecai and Rigby to get the tape since they had passed the time limit to give it back. Since Rigby smashed the tape, they have to pay for a replacement. Pops does this. However, he misunderstands currency and pays the employee with lollipops. 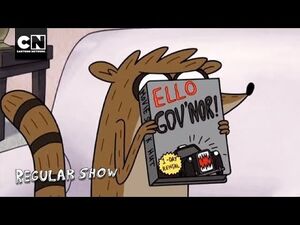