Britt Warrick is a recurring villain in the Game of Thrones video game. Britt is known for being a sadist and a liar.

Britt is a man-at-arms working under House Whitehill. Britt alongside many other soldiers were tasked with suppressing further Northern rebellion. He ruthless and uses his power as a soldier to abuse and kill ancient civilizations just for his own,one of the civilians being Gared tuttle's father.

After killing Gared tuttle's father alongside two other soldiers, Britt was caught by Gared and out of angry Gared attacked him, during the battle Gared killed one soldier with an axe or a pitchfork, and defeated the other soldier in battle, during that fight Britt ran away to tell Lord Whithill what happened but Britt lied to him and made Gared look like the villain in the situation so Lord Whithil would demand that Gared would be killed.

But for killing Gared's family Britt got exiled to the wall to become a new recruit for the night's watch to keep the whitehill's reputation safe from criticism from other houses. Do to being betrayed by his house Britt became angry and bitter towards the Whitehill's and his hated for the Forresters became even worse. At the wall Britt decide to kill Gared when he got the chance to "Finish the job" once he got the chance to be alone When Gared was patrolling on top the Wall, Britt used this as his opportunity to strike. Britt aggressively attacked Gared and told him how he brutally murdered his father and sister. Depending on the player Gared can attack Britt out of a fit of rage or Decide he's not worth fighting and try to back off but either way the fight will end with Britt being savagely beaten by Gared. in pain Britt moves at the rim of the Wall and he will asked Gared to finish him off. Gared can either let Britt bleed to death, kick him off the wall and watch Britt die screaming in fear as he falls to his death, or make Britt suffer the same death as his family, by cutting open Britt's stomach and finish him off by kicking him off the wall.

Britt is a skilled swordsman during battle he was able to easily knock the sword out of Gared's hands and almost kill him.

Episode One: Iron From Ice

Episode Three: A Sword in the Darkness 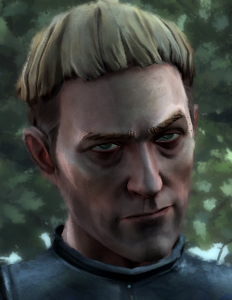 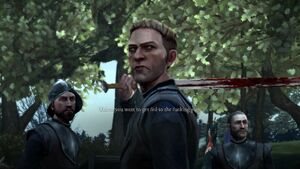 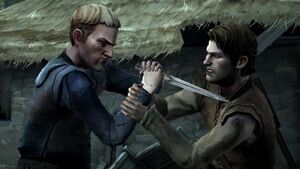