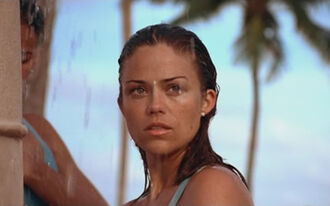 Brittney Havers is the main protagonist in Wild Things 2.

She was portrayed by Susan Ward.

Brittney is a senior at a South Florida high school who lives with her rich stepfather Niles Dunlap. One year prior to the events of the film, her mother ran her car off the road at Gator Alley and was supposedly eaten by alligators. When Niles dies in a plane crash, Brittney receives a small grant until she finishes college, whereupon the estate will grant her $25,000 a year for life, whereas the rest of the money goes to corporate trust unless a blood heir is found. Just then, Brittney's classmate, Maya, claims to be Niles' biological daughter as per her mother's extramarital affair, which is proven via DNA test. The whole thing turns out to be a scam, however, as Brittney, Maya and Dr. Julian Haynes were in cahoots to secure and share Dunlap's fortune. After Maya kills Dr. Haynes, Brittney kills her and is revealed to be in cahoots with yet another participant in the scheme, Terence Bridge. She later reports that Bridge's car contains a dead body, prompting his arrest. Her next move is in a private plane with Niles, who turns out to have faked his death in order to avoid prosecution for embezzling funds and paying money to a gambler. Turns out, Niles' parachute was filled with newspaper. Brittney pushes Niles to his death and lands safely in the swamp below, where her mother (who is revealed to be alive) is waiting for her. It is revealed that Brittney and her mother orchestrated the entire plot to get their hands on Niles' fortune. As they relax on a tropical island, Ms. Havers takes a sip and remarks that the drink is strong. Brittney then replies "They make them strong here, don't they?" with a smirk, implying that she poisoned the drink.

It is actually Brittney who kills Julian Haynes. He is seriously hurt by Maya, but he shows being alive when Brittney wants to bury him and she finishes him with a knife.

Retrieved from "https://villains.fandom.com/wiki/Brittney_Havers?oldid=3808580"
Community content is available under CC-BY-SA unless otherwise noted.