Researching the power of Snowflake

Brixton Lore is the main antagonist of the 2019 film Hobbs & Shaw, which is a spin-off of the Fast & Furious franchise. He is a former agent of MI6 who betrayed them to seek a viral bioweapon known as Snowflake. His body was modified by Eteon, which gave him superhuman powers (hence his nickname "Black Superman") to be used as a tool by said organization to claim and unleash Snowflake to kill most of humanity.

He was portrayed by Idris Elba, who also portrayed Russell "Stringer" Bell in The Wire, The Commandant in Beasts of No Nation, William Roque in The Losers, Colin Evans in No Good Deed, Krall in Star Trek Beyond, Shere Khan in the 2016 The Jungle Book film and Macavity in the 2019 Cats film.

Not much is known about Brixton's early life, other than that he had joined MI6 during his adulthood. He served alongside Deckard Shaw, where his worldview and perspective changed after countless missions. His apathy towards humanity and its actions caused him to be recruited by Eteon, who demanded that he recruit Deckard as well. However, when attempting to enlist his fellow agent, Deckard, under orders from MI6, put a bullet in Brixton's head, believing he had killed him.

However, Brixton survived the injury and his wounded body was recovered by Eteon, who implanted within him among other things, cybernetic and mechanical implants, optical and physical enhancements and prosthetic limbs, transforming Brixton into a super soldier. Brixton proceeded to follow Eteon's orders with loyalty, believing that Eteon's actions were paving the way to saving and steering humanity in the right direction. Brixton then assassinated Deckard's team and pinned the blame on him, forcing Deckard to become a fugitive and become a mercenary.

Theft of the Snowflake

Eteon commissioned Professor Andreiko to create a pathogen capable of delivering vaccines. However, after the serum's completion, Eteon reprogrammed it into a virus, dubbed "The Snowflake", capable of eliminating half of the human population, those whom Eteon deemed weak. MI6 soon became aware of The Snowflake's existence but were unaware of who created it. After managing to track The Snowflake's position, the agency ordered a group of agents to infiltrate the facility and to obtain the virus, although with the added stipulation that they were to use electrical rounds on the soldiers guarding the virus, in order to interrogate them afterwards. After subduing all of the men, agent Hattie Shaw was sent into the convoy to extract and secure the virus.

However, Eteon dispatched Brixton to assassinate the agents and retrieve The Snowflake. As Brixton murdered the other agents, Hattie took the opportunity to escape from the facility, although not before injecting herself with the virus. Using one of the agent's radios to impersonate him, Brixton Lore informs the MI6 that Hattie Shaw attacked the other agents before fleeing with the virus. Brixton then warned his fellow soldiers to exercise caution when apprehending Hattie, and stressed the importance that Hattie should receive the brunt of the responsibility for their crimes.

Brixton managed to locate Hattie Shaw, discovering that she was being held at the CIA London Black Site. Brixton proceeded to break into the building, kidnapping Hattie and scaling out the window and down the building. Luke Hobbs and Deckard Shaw decided to work together to liberate Hattie. After defeating the soldiers, Hobbs jumped out the window, with Deckard using an external elevator. Hattie managed to attack Brixton and free herself, and as Brixton prepared to retaliate, Hobbs crashed into Brixton. Brixton then fought with Hobbs, although his cybernetic eyes were capable of tracking Hobbs' movements and countering them. Deckard then entered the fight, and the pair were surprised to see the other, Deckard having believed Brixton to be dead.

Deckard retrieved his McLaren 720S and, along with Hattie and Hobbs, attempted to flee Eteon's pursuit. Brixton was able to keep up with them using his custom bike, although Deckard tricked him into slamming into a bus. Despite being able to survive, his bike was disabled, forcing Brixton to temporarily abandon the chase and utter that there would now be war between them.

Brixton returned to Eteon Headquarters, where his body was reprogrammed and repaired. The anonymous head of Eteon informed him that Luke Hobbs and Deckard Shaw were to be apprehended alive, as Eteon wished to recruit them. Brixton attempted to remind them that Deckard had already refused once, but was forced to relent once he was threatened. Brixton was then notified that Madam M had captured Hattie Shaw and was outside the facility to deliver her. Brixton demanded if Hobbs and Deckard were with her, and threatened to kill Madam M if she was lying. As Brixton escorted Hattie towards the virus extracting machine, he became angered when Hattie suggested that he was killing people and committing crimes for the sake of money, furiously telling her that the crimes he committed was for the greater good of humanity.

Brixton soon became notified that Hobbs and Deckard had infiltrated the building, and lay there in wait. After having the pair rendered unconscious, he electrocuted them several times, attempting to recruit them, and ultimately decided to kill them when they refused to join Eteon. However, his plans were impeded by the arrival of Hattie, who had escaped her restraints and had held Brixton at gunpoint, as she had overheard Brixton's gloating to Deckard of framing him. Brixton gleefully informed Hattie that the guns would not work without fingerprint authorization, only for Professor Andreiko to burn him with a flamethrower. As Andreiko incinerated and killed the other soldiers, the two Shaws and Hobbs began their escape, prompting Brixton to snap Andreiko's neck, killing him, and pursue the trio.

Brixton landed on the back on the truck that the trio were using to escape. However, as Deckard and Hobbs had placed an explosive timer within the building, the headquarters began to self-destruct, causing tons of rubble to fall on them. As Brixton dueled with Deckard on the back of the truck, Hobbs commanded Hattie to drive the truck while he aided Deckard. Despite the duo not strong enough to defeat Brixton, the ensuing rubble fell on him and the vehicle; while Brixton survived along with Hattie, Deckard and Hobbs, the machine required to extract the virus was damaged during the chaos.

Because the machine to extract the virus had been damaged, Deckard Shaw, Hattie Shaw and Luke Hobbs traveled to Samoa to enlist the aid of Timo Hobbs. Eteon managed to track their flight to Samoa, prompting Brixton and a handful of soldiers to travel there via helicopter. As Brixton and the Eteon soldiers approached the Hobbs residence, Luke Hobbs gave a Samoan war cry along with his brothers, triggering the Battle of Samoa.

Since the extraction process took thirty minutes, Hattie sat out most of the battle, although she was forced to join when she was attacked by Eteon soldiers. While she succeeded in disarming a number of the soldiers, she was soon apprehended by Brixton, who kidnapped her and brought her to his helicopter, forcing Deckard, Hobbs and his brothers to attach their trucks to the helicopter to prevent it from taking off, causing it to crash. Hattie survived the crash, along with Brixton and one of the soldiers. Brixton ordered the lone soldier to empty his gun into Hattie's heart once she had successfully expelled The Snowflake, and left to subdue Hobbs and Deckard.

Hobbs and Deckard fought Brixton, but realized he was able to pinpoint their individual attacks and counter them, and was only able to be hit when they attacked at the same time. Deciding to truly work as a team, the duo announced that they would watch each other's backs and sustain a blow so that the other could attack Brixton, and managed to fight the super soldier, defeating him in combat. With only a few seconds left on the timer, Hattie disabled the soldier, rendering him unconscious, before stealing his gun. Hattie then recovered the vial containing the virus and rejoined Deckard and Hobbs. Due to Brixton's defeat, the anonymous head of Eteon chose to trigger the kill-switch embedded within Brixton's mind. Realizing what had been done, Brixton gravely let out a laugh before falling to his death off the cliff into the rapids below.

Brixton Lore was a very ruthless individual. He possessed an "ends justifies the means" personality. During his time as an MI6 agent, his experiences during countless missions caused him to adopt the perspective that humans were weak, and eventually came to embrace transhumanism, believing that machinery was the next step to human evolution. Brixton was willing to use his influence over the media to deliver false narratives to suit this agenda, and was willing to unleash The Snowflake virus to kill off half of the human population in an attempt to weed out those Eteon had deemed as weak and unworthy to survive. Despite willing to commit numerous crimes, he became angered when the insinuation of financial gain was brought up, furiously informing Hattie Shaw that he did not care for monetary desires.

Brixton also possessed a spiteful side, uttering that he would wage war with Luke Hobbs and Deckard Shaw after their escape caused him to crash into a bus in order to escape his pursuit, and found glee while torturing Deckard that he had framed Deckard in the past and enjoyed the fact that Hattie resented Deckard due to the lie he had cultivated. Following his defeat at the hands of Hobbs and Deckard, Brixton discovered that Eteon had triggered a kill-switch, prompting him to morosely chuckle and accept his fate. 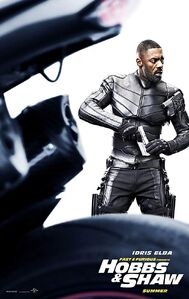 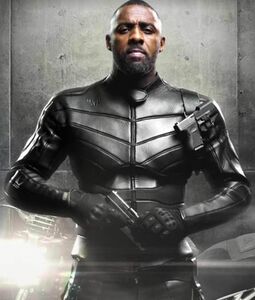 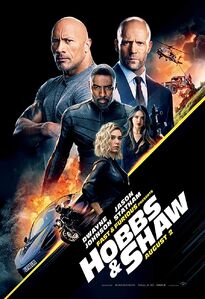 Brixton on the films poster.

Brixton capturing Hattie, running down the side of building with his men. 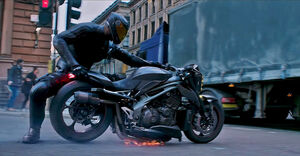 Brixton during the bike chase. 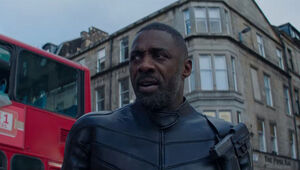 Brixton with a captured Hobbs and Shaw.

Brixton vs. Hobbs and Shaw.

Brixton challenges Hobbs and Shaw in the final fight. 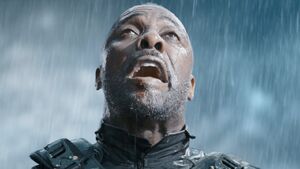 Brixton's death.
Add a photo to this gallery

Retrieved from "https://villains.fandom.com/wiki/Brixton_Lore?oldid=3547186"
Community content is available under CC-BY-SA unless otherwise noted.