Villains Wiki
Register
Don't have an account?
Sign In
Advertisement
in: Infobox Update, Type Dependent on Version, Redeemed,
and 14 more

He was voiced by Alex Ness in the games and by Cedric Yarbrough in Skylanders Academy.

Broccoli Guy has the ability to heal allies using his magic. He can also cast a single spell to serve more offensive purposes, but for the most part, he's more for support.

Broccoli Guy is one of three villains you can find and battle in the Chompy Mountain level, alongside Bruiser Cruiser and Chompy Mage. Upon finding him, he'll claim he was framed before the battle against him begins. Upon defeat, Broccoli Guy is sent back to Cloudcracker Prison or becomes playable via a Life Trap.

Broccoli Guy appears as a non-playable character in the game, who serves as one of the hosts for Troll Radio and the arena alongside Chill Bill.

Broccoli Guy is a recurring antagonist in the Netflix original series Skylanders: Academy, appearing as a member of the Doom Raiders. He first appears in the fifth episode, "The Hole Truth", as an inmate at Cloudcracker Prison alongside his fellow Doom Raiders. He tricks the Skylanders into sending him and his team to the Hole, where he watches by as his allies combine their powers to create a wormhole and escape alongside them. 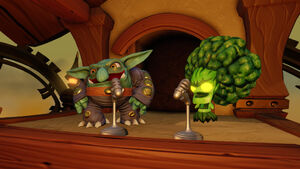