The Powerpuff Girls: Beat Your Greens

Can regenerate their body parts in the process after each hit

Rule the universe one planet at a time.

Mind control every parent in Townsville and complete the domination of the city.

The Broccoloids, also known as the Broccoloid Empire, are adversaries of the heroic Powerpuff Girls and main antagonists of The Powerpuff Girls episode "Beat Your Greens". They are an evil alien culture made of broccoli who intend to completely dominate the universe one planet at a time.

The Broccoloids have arrived on planet Earth and tried to conquer its inhabitants by completely controlling their minds. To do this, they use a mind control device and plant alien-control spores with broccoli on the ground, causing the Professor and all grown-ups in Townsville to fall to the ground, but none of the children (especially the Powerpuff Girls) are affected because their dislike of broccoli causes them not to eat it.

Eventually, Blossom finds out what's wrong with the broccoli. The Powerpuff Girls ate on some of the Broccoloids and got ove their fear during the invasion. They soon gathered all the children of Townsville who joined in to save their parents and fought back against the invaders. The Broccoloid Emperor who was among his kind while on his alien carrot steed, was the last one left before he met his demise at the hands of the Powerpuff Girls who ate him and destroyed his sceptre which signals empowers the mind-control process. 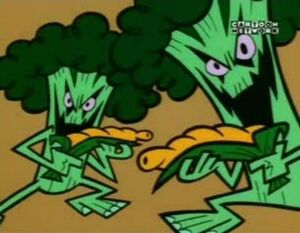 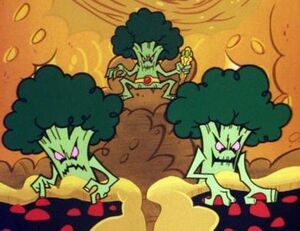 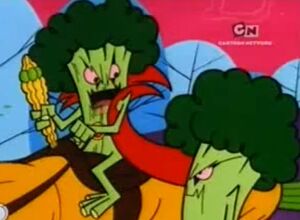 The Broccoloid Emperor leading his invading troops to battle. 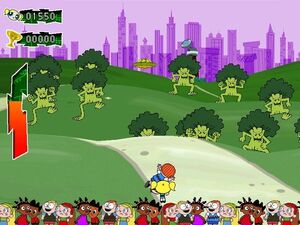 The Broccoloids in Powerpuff Girls: Gamesville.
Add a photo to this gallery

Retrieved from "https://villains.fandom.com/wiki/Broccoloids?oldid=3648542"
Community content is available under CC-BY-SA unless otherwise noted.