Brodus Clay is a villain in the WWE. He is signed to WWE Raw as a Face as a Funkasaurus.

During the finale of season 3 of NXT, it was announced that Clay would be part of the fourth season, with Ted DiBiase jr. and Maryse as his mentors. He made his in-ring debut on NXT on the December 14 episode, teaming with DiBiase to defeat Byron Saxton and his mentor Chris Masters. He suffered his first loss the following week, when he, DiBiase, and Maryse were defeated by Saxton, Masters, and Natalya in a six-person mixed tag team match. Clay won a four-way elimination match on the January 25 episode of NXT, earning the right to choose a new Pro. He picked Alberto Del Rio as his new pro, and then attacked DiBiase. The following week, Clay defeated DiBiase in a singles match. On the February 8 episode of NXT, Clay won both a match and a challenge to earn three immunity points, his first of the season. Both he and Johnny Curtis were tied on immunity points at the end of the show, and an audience vote determined that Curtis was immune from elimination. Clay survived when Byron Saxton was eliminated. In the season finale on March 1, Clay ended the competition in second place, losing out to Curtis. On the March 7 episode of Raw, Clay debuted as Del Rio's new bodyguard and replaced him in his match against Christian in a losing effort. On the March 11 edition of SmackDown, Clay competed in a tag team match, teaming with Del Rio in a losing effort against Edge and Christian. Over the next several weeks, Clay attacked Edge on several occasions and accompanied Del Rio to the ring at WrestleMania XXVII. As part of the 2011 WWE Draft, Del Rio moved to Raw. Seemingly, Clay's services would no longer be required. Clay would team up with Del Rio one final time on the April 29 edition of SmackDown, but unfortunately the team was defeated by Smackdown's newest superstar Randy Orton and Christian. Clay interfered in Del Rio's match against Christian at Extreme Rules and tried to stop Christian from claiming the World Heavyweight Championship but was unsuccessful as he was busted open and Christian became the new World Heavyweight Champion. 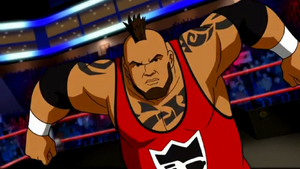 Brodus Clay in Scooby-Doo! WrestleMania Mystery
Add a photo to this gallery
Retrieved from "https://villains.fandom.com/wiki/Brodus_Clay?oldid=3042172"
Community content is available under CC-BY-SA unless otherwise noted.